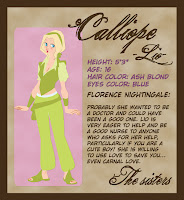 I was drawing the new Character Presentation to upload as Extras at the end of each chapter... and went back in time, on the blog, to see what I had written for Lio back then.
If you go read it you'll see that the first Lio I had in mind was quite a boring character. Also Foxy was supposed to be more of a hygiene freak, forcing Cat to keep the ship spotless.
Eventually, when you start storyboarding, characters write themselves and totally surprise you.
So the doctor, being a doctor, became the hygiene freak and Foxy remained a regular hypochondriac.
Now Lio... she was not supposed to be the way she is at all. She was supposed to be the total opposite/compensation for Foxy so the dialogues between the two would have been mostly: are you alright? No, I am dying! Do you feel okay? No, I think I got infected by something.
In a long run this kind of stuff become boring and characters never develop depth.
Sure they fell in another routine of "yohoo, I jump you!" but there are more variations on the theme to come and I get to play with that a little more. Besides the story grows up and develops.
Now... I still had in mind to have one of the sisters be a men eater. In my first idea she would manage to kiss every single member of the crew... but then I thought it would be too much of a clone of Taddea (a character in another story I wrote) and I don't like to repeat things, I run out of ideas too.
Anyways Pea was supposed to be that girl but then she would not be a likeable character at all and I already have Pifo as a comical relief (even though I will not keep him always in that spot).
At one point I thought Pifo could do that - kiss 'em all - and rank the best kisser too XDD.
Lio kinda jumped on Foxy when I was sketching the scene of the mouse... I clearly thought: these two will never make it, she has to jump him. That's when she sucked his finger! XD
Anyways... I just came here to ask one thing today: would you like to interview any of the characters?
One of my friends said: I would like to ask the girls what's the favorite feature or body part in the boy they are involved with.
I think I'll use her question in the freetalk... but would you like to add some questions too? Let me know.
Posted by dedasaur at 8:11 AM

Email ThisBlogThis!Share to TwitterShare to FacebookShare to Pinterest
Labels: Characters