So, how was the update? Did you enjoy it?
As I previously said: we are in Act II and things will finally begin to happen.

While Feetsie is climbing up, towards the crow's nest, Cassandra simulates a heat stroke.

As the doctor says: a heat stroke is not something you want to ignore. Why? It leads to hyperthermia and people would die of it. Now to see if the girl really does have a very bad heat stroke, since she looks all flushed he needs to check her temperature.

Eventually one thing leads to another like, for example, spilling jars hahahaha. Good thing the doctor uses wooden tools and thick ceramic.

Ceramic is usually not to be contemplated on a ship, except for water and wine (and possibly oil) containers. These containers were made of heavy terracotta and were called Orcio (in the North of Italy) and Giara in the South, particularly in Sicily. The one in the picture is a giara (sounds like jar, right?). These types of containers were used to transport wine, oil and fluids ever since the Greeks and the Romans. How do they stand on a ship? They are put in holes cut in the wood (not always cut directly on the floor but on a elevated "foot") and they are tied to the walls with very tight ropes.

Now, the doctor's room looks like an apotecary shop. He has some ceramic jars (barattoli) and they might be all very colorful from Sicily or from Deruta or Tuscany... or in Florentine style (like the picture to the side).

Ceramic is fundamental in the Mediterranean area. There's a lot of clay in the ground and terracotta is a must, so most of the tools used in everyday life are made still of ceramic and there's a strong tradition. Every Region has its own style. 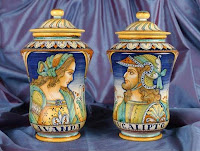 
Well, what I use is a simple, standard, pharmacy jar, white and green, with small decorations and the names of the herbs on it. Even though I would like to go to the extent of drawing Sicilian jars with lemons and orange flowers on them... it makes my heart bleed to think that these beauties might break at the first storm.
He would tie them, though, and put fabric between them. Ceramic is still the best type of container you can think of... although I think he uses mostly bossoli (this term is not a commonly used term in Italian anymore, just some dialects retain it, and it's used to describe jars made of wood).

He does have some glass vials and bottles... but glass back then was thick, opaque and very hard to break. So his tools are mainly made of wood... particularly this thing> mortar and pestle.
It is fundamental to crash herbs and make medicine! He was using it already when he was showing Lio around, describing his job on the ship in chapter 3.
Our doctor is supposed to be called: surgeon. But because he does act as a pharmacist and a physician... I just prefer to call him doctor! ^^" (it's a modern term though, but allow me, it sounds better).

But let's go back to our heat stroke. Westley figures out pretty soon that he might have a chance with the girl and goes for it.
Whatever he does from now on, in order to get the girl, is out of his own selfishness, of course, because love is greedy hahaha.
In fact... even when he acts as a doctor for her he is not doing it because it's his profession but because he'd rather be her lover than her doctor... or, rather, he prefers it! Love also comes in the shape of caring for the one you love. He wants to take care of her and keep her close. The evil doctor, when it comes to emotions, is a very honest guy.

But one thing you must know: kissing a girl with chapped lips is very bad for the girl.
Licking is very bad, saliva is not good at all... so... the guy is not thinking! Love is blind too.

To Cassandra love is scary, probably... hahaha. So she gets sunburn to avoid the doctor.
To see her blush under a sunburn... the doctor is very keen.
How is he treating her?
Aloe vera was already introduced in Europe in XVII century. Consider that these guys travel a lot and that the virtues of aloe vera were already known to Islamic doctors.

I am not sure if it works or not, I find it soothing but not helpful. My mom would use tomatoes or potatoes on me hahahahaha. My grandma would do prayers with water and a candle.
Honestly my doctor just tells me to soak in water and then gives me a cream... I have no idea what the stuff is made of but it works.
Luckily I haven't gotten a sunburn in 10 over years! That's why I look young and pretty (yeah, right!).
Posted by dedasaur at 2:42 AM

*FFFFFFF* You ARE young AND pretty, Miss Lizard.
---

I love the Deruta jars *_*. We went visiting one of the shops there during a schooltrip, and the brushes they used for decorations were teeny-tiny, a single hair in some cases. Bad for the artisan's eyesight, but amazing *_* .
---

So they used aloe. Somehow I was thinking of oil and carrots poultice or some kind of vegetable 'butter' XD. Wonder if karité butter would be too anachronistic or too exotic...

The Doc's heart is in the right plac... as well as all the rest of his delectable self >3 .

Oh it's hard to keep vegetables and if you had carrot or tomatoes or potatoes on a ship... you would eat them.
But aloe jelly is probably easier... you just pluck the leaves and store the thing away (and probably he add some things to keep it fresh and preserve it... so oil must be in it too, I am guessing)