Always sorry to see some people go after many years of following - I hope it's because they went back to their own life not because they could not wait for my life to slow down again hahaha.

But let's catch up on the curiosities as we are one chapter behind.

This chapter does not have a huge amount of things to note.
It is one of the self explanatory thing that throws in a new light on characters. 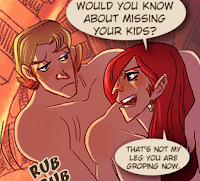 The first thing we discover is that Telegonous and Circe had a child.

So far all we know about Telegonous is that he is husband n.1, everybody loves him, he wants to "love" everybody (boys and girls doesn't matter, as long as they are cute)... and he has no number.

He runs errands for Circe such as... keeping an eye on Nicoli. 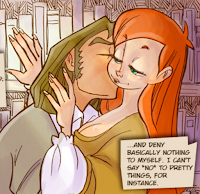 We saw him briefly in Long overdue, but it's clear that Circe trusts him and he holds a special place in her heart. 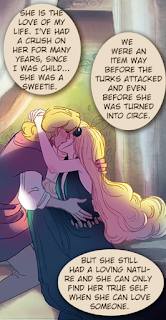 This bit of dialogue here is very important.
This is where Tel tells us that he and Circe go back to the time when she was still only Benedetta.

As if it were a very important marker in history, an important date.
Tel also refers to Circe as being "cursed" it is probably because he could see the difference in behavior between Benie - who was a sweetie - and Circe who had internal turmoil and could only find her true self when loving someone.

Where they talked about little Gemma and Circe is heartbroken.

And apparently Circe names her kid the same way Kane uses terms of endearment. Gioia and Gemma are synonyms in Italian - like jewel and gem are in English. 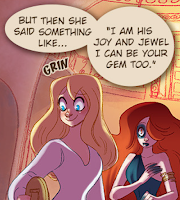 This is once again Castalia and her feline instinct - if you wish XDD - being able to see through people because of her sincere nature.

At this point of the story Castalia is a mom and can relate to Circe's loss. We still don't know what the deal between these two ladies was and what they talked about when Castalia went to the Circeius... but we know that, at one point, Castalia had to return the crew she borrowed (Hermes and the white horses) and then sit down with Circe and rethink the terms and conditions of their contract on the beach.

Although Gemma is really not Castalia, but just a small fraction of her, some of her qualities are still shining through.

A love for high places for instance.

This scene is mirroring this other one...

You remember this one right? In that scene too Kane helped Castalia sit down and perch herself in a safe way.

Why did Circe make Gemma look so much like Pandora? Does Kane really has a mother complex?  We don't get to know until later on but hey it's out there for you to think about. For sure Kane has a thing for blondes with big boobs and blondes in general (he does tell Wes that if he weren't blonde he wouldn't have stopped to save him hahaha). 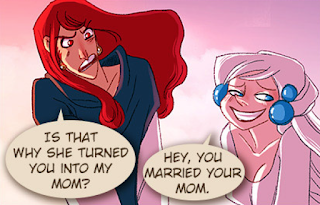 Somehow Kane and Gemma's presence are helping Tel and Circe improve on their relationship - that was sort of colder after the loss of their child - but the important thing about this scene is seeing that over the years Circe has taught her husband how to perform or manipulate illusions. This means she trusts him.
We do not know much about Telegonous but we got to admit that sticking with Circe, after Benie "disappeared", takes a whole lot of devotion.

Let's move on to the musical pun. I am so sorry, it's a stupid pun! XDD 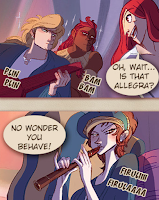 Over the chapters we have seen Lento and Rudo fight over "tempo" vs "rhythm".
Everybody always thought it was a musical quarrel but it was for a woman instead.

And yes Rudo is married but we know how the Circeius works hahaha.

Now let's talk about what happened here - aside from the comedy itself.
We put down as a premise that Circe has behaved in a conflicted manner when it comes to rules.
She lays them out when Kane first enters the Circeius and she told Dado that the rules are there for a reason (when she asks him to take Kane back in the dorms).
But the she always let Kane get away with lots of things: sleep in the library, have dinner with the outer circle artist even after he has entered the inner circles, she doesn't scold him directly for disrupting the rising ceremony (and even jokes about her clothes coming off easily) and she doesn't punish him for entering the inner gardens when he is not supposed to... she punishes Philip instead. 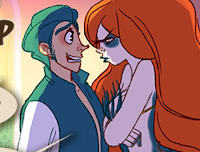 So what do we know about Philip? He earned his way up by sleeping with everybody. What is the problem? Everybody sleeps with everybody, yes, but there is a time and place for everything in a place with so many rules. The time is Paradise Time, the place is Paradise.
Yet Philip gets kinky where he is not supposed to.
But most importantly what do we know by now? Baby Balthasar is on his way and the ceremony needs three candidates.
Can Circe afford to have this sort of candidate to taint her precious ceremony?
She probably needed an excuse to get rid of him, the stupid boy did the rest.

Finally, one of Circe's illusions turns out to be useful (and funny)!
Castalia sort of called it. 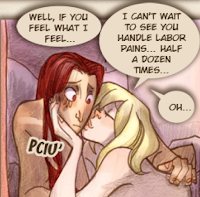 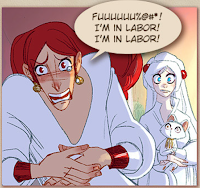 But since Kane likes blonde, to him the blonde hair is an improvement on the Balthasars' perfection. They are upgrading.

Now let's have a little insight on Book of Powers.
Gemma has been studying to write a book of power to return Castalia to Kane once the ceremony is over.
The book must be written by witches/sisters and the intention is to help people remember important things and see through illusions. Remember important things... Chapter 10 is called "I know" wink wink. 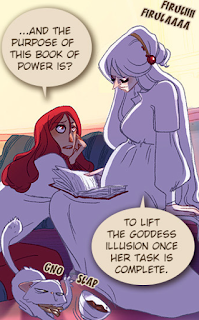 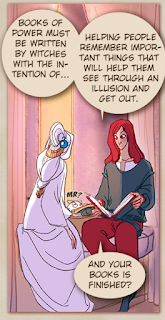 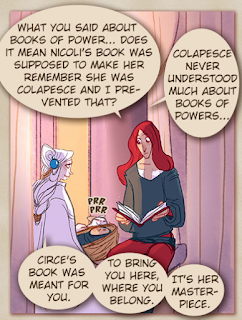 This is where Kane finally understands what Nicoli's book was. Of course he thinks the book was meant for Colapesce to return to her true self after her sabbatical but Gemma tells him the book for was him.

You need a book to break an illusion. Kane must be under one. 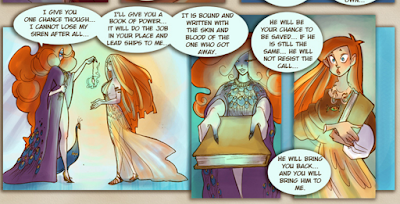 Posted by dedasaur at 3:06 AM No comments: 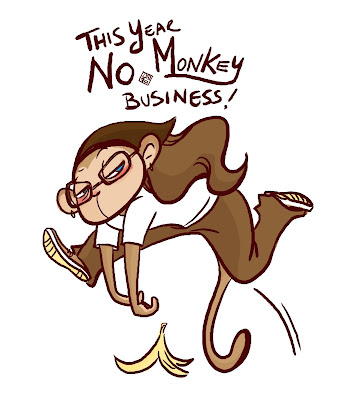 The curiosities will return tomorrow.
Posted by dedasaur at 6:31 AM No comments: