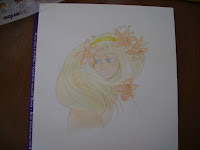 First of all:
Happy 45th Birthday, Singapore!
I had forgotten it was a holiday today and went to the office... it was empty, hahahaha. So I watered the plant... finished Balthasar (which is hosted already but will be visible only in 2 days - and I did this in case something comes up with work, within two days)... came back home and tried my watercolor set.
This is the first layer. As you can see... I don't know how to use watercolor but.. heck I'm tired of using Photoshop all the time. 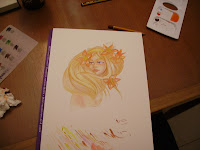 Also if I do digital art all the time I won't be able to give any drawings away, except the crappy ones I rush for the comics... and I think and nice illustration would be a better reward.
Of course if I manage to do it right. In this case... it's kinda sloppy and I'll do a second attempt. This one I will scan still, use it to experiment, and I will draw the ink lines on a separate piece of paper and see if I like the effect and if I do I'll make a bigger one. 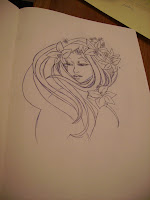 Originally she was supposed to look with her eyes slightly closed.
But Castalia was doing that in the cover of volume 1, wasn't she?
Why should Cassandra do the same? So I decided to draw the eyes opened and somehow it gave her a sweeter look.
She is wearing medicinal flowers... 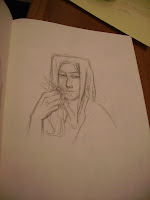 Of course HE will be in the back cover, holding the same flowers... as if he were the one putting them in her hair :D.
These are just the basic drawings... of course I am no Alphonse Mucha but I want you to know that I am building a window around these two guys and eventually will see if there's a way to make them look like a stained glass window!
The intentions are good... they will probably come out wrong. Just praise the intention hahahaha... for everything else, I have a long, learning, way to go!
Posted by dedasaur at 1:45 PM