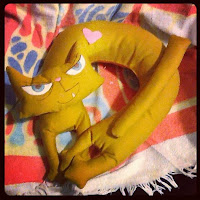 Holoooo!
Lorenzo and I are going on vacation from the 27th to the 6th.

The comic will be released today and tomorrow - we need to finish Nicoli's dream - but I won't be able to inform you here, probably.
So you know the drill: smackjeeves, Deviant art and Shockdom will update.

From the 27th onward we take a break. I believe I will be able to upload my travel sketches on instagram, you can follow Dedasaur there, because I plan to sketch a lot! (it's what this vacation is all about). 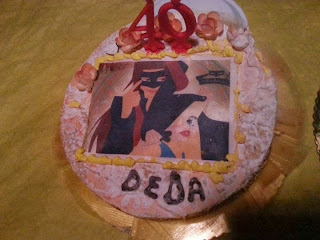 Thank you all for the birthday wishes.
I received so many messages it was hard to keep up and reply to all of them.

I had a very nice birthday (received 3 cakes already and am waiting for a 4th one hahaha and a lot of books as presents)... and here is the best cake I could ever get - although it got into an accident in the car, they told me, it tipped over, the decoration got destroyed and only a few flowers and the image were spared... apparently the writing was not just my name hahaha.

Anyways... I will be going on vacation from the 27th to the 4th and during those 8 days the comic will be taking a break as well... because, even though I might have a wifi, I cannot guarantee it.

I am going on a cruise - it's a present to myself.

If you wish I will be uploading the sketches I will draw during the trip :D
I will make sure to finish Nicoli's Dream before I sail away, and when I return we'll continue with Colapesce's Reality. 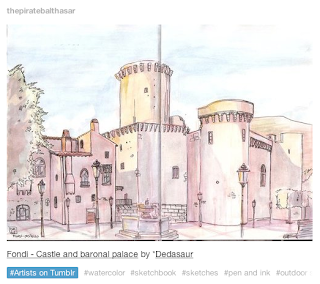 Tumblr gave me a blue tag as Artist on Tumblr for this sketch I did of Fondi's castle. Someone once told me it's a difficult thing to get so I am quite happy someone lines my little sketches.

Tapastic gave a feature to The Flower and the Nose this week too. I am glad for the comic and am preparing a series of pages during this vacation to be released little by little after I am back in Singapore too.
Posted by dedasaur at 7:16 PM No comments:

Since today is a special day, better than any birthday, I wanted to start a new game with you: the extra pages game.

Here's my premises: Volume 6 of The Pirate Balthasar will be taken entirely by Long Overdue and its little specials.
Overall the story and its specials occupy 160 pages.

I might be able to slip in "Circes" which is the following special then again... maybe not hahaha because I haven't counted the pages yet but I have a feeling it won't go over 20 pages.

So here's where the game comes in: I would like to make this volume 190 pages.

How about we make a game where we pick the best fan arts to be put at the end of the volume (with links to the original author's page)?

I have some fanart overdue for posting on this blog so I thought I'd post a few all together.

The first one is by Sharaiza, please visit her Deviant Art account and leave a message.
She made a nice fan art of Balthasar and Andromeda. 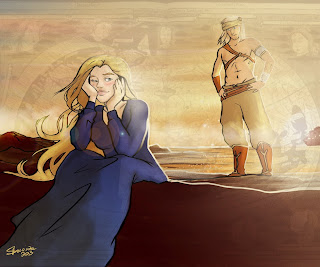 The next two are both by bubbledriver. She likes Circes very much... 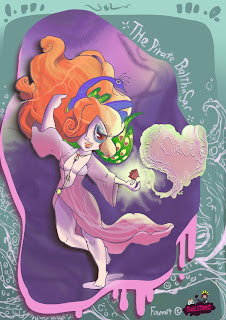 ...and she also did a fanart of Nicoli and Ahr.  Same here. Please visit her Deviant Art account. She organizes a lot of giveways and is working on some awesome projects and is an awesome comic artist. 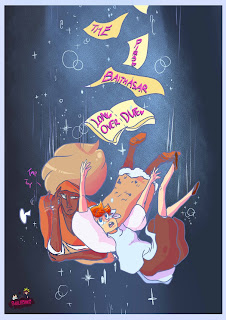 The last one is by koorihimesama - who usually delights us with her graphics. Please visit her as well and leave a nice comment under her drawing. 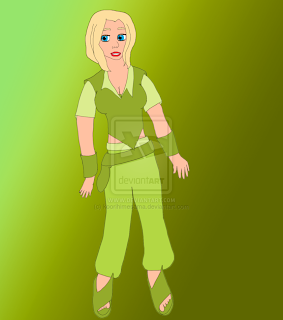 I will be travelling tonight but before I go I thought about leaving you with something to think about: What's coming up next?

Which will basically conclude this volume - because this story is one volume in length (dear God).

Afterwards according to polls we have:

- Circes (this is the story of how Castalia got to meet Circes and so we get to know why she is also affected by her spells and is so scared of this woman)
- Murder in Bologna (this story covers the second to last one of the Origins cicle - here we see how Kane and Wes met Martin during their University years and also got to solve a murder)
- How durians arrived in Italy (this is a story set on my side of the World - South East Asia, where I currently live - so you get to see malay pirates, bugis pirates and tonchin pirates and pontianaks and zombies hahaha)
- Badia (in this story you see Kane and Castalia going back to Sicily and Castalia gets to see her Kane in a different light - they also stumble upon the local mafia boss and life becomes less easy).

But here are some of the other stories I have planned:
- While you were away (this is the story Nicoli read in Long Overdue when Pifo explained her what happened to Josh)
- Abduction to the serraglio (Kes gets kidnapped by Turkish pirates and ends up in a very odd serraglio)
- Animal talk (I think this is the story where we get to see all the animals in the story, tell the story from their point of view)
- Lio and the stork (this is a short short story about Lio trying to bargain with a stork to get a baby)
- Zizack and Pearlie (clearly we know what this is about).

Along the way I also came up with these ideas:
- The slave ship (concludes the dilemma of Cat and Feetsie having babies and it also gives an ending to Lio and the stork)
- Family Traditions (a Jewish family moves on the island of Amado and Wes feels odd about it, especially since their presence creates problem between Itzak and his friends). This might be our Christmas special.
- Our Little Brother (is the last story belonging to the Origins cicle and tells us about the meeting between Kane, Josh and their little brother Amil).


One more story, I suspect many of you will ask for it right away because it's the continuation to Long Overdue:

- The Gem of the Mediterranean Sea.

So from sunday onward the releases will come out at a different time - and during my journey, time might disappear or overlap hahah I am travelling back in time after all, going back to Europe. So I'm not quite sure if that will make two pages in one day or one less page cuz one day is gone since I'm travelling backward... Ye be warned!
Posted by dedasaur at 4:15 AM No comments: