Countdown reset. 11 days to go to next release, I hope you enjoyed this one.
The calendar is now set for the whole chapter 15 but I must fix it for chapter 16 (as I shifted the next breakdown).

But now... time for the curiosities of the week. 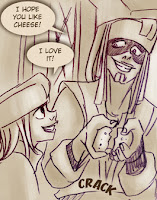 Cheese goes crack! That's because it's firm. In Italian that would be called: formaggio stagionato (which means "seasoned" as in... old.)
The most famous is probably the Parmiggiano kind, or as they call it in English... Parmesan Cheese (it's 2 years old).

My guess is they are eating Pecorino... let me tell you, you put some honey and pepper on Tuscan pecorino (my favorite type, although I should prefer the Roman type being from nearby Rome) and it's heavenly Heaven. In Sicily pecorino is mild and goes through several stages (from soft to firm). The medium one, called Primo Sale is typically salt-less and it's ideal on Sfincione pizza.
So my guess is, being Cat a sweet-tooth, they are eating primo sale! Droool. It's soft enough to be cracked bare hands, makes a crack sound but it's soft enough and juicy enough and not too salty... so it can be eating with some nice bread. I love it! 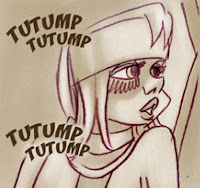 This is a silly thing... you might have noticed that Callista's heart does not go badump badump... it goes tutump tutump like somebody banging on a door or against a wall.

It's a knocking sound.

Reason for this is that she does not feel the sound in her chest but in hear head, that's why she cannot sleep. The noise is keeping her up.
Heartbeats felt in your chest make your heart flutter as if it wanted to escape the rib-cage. When you feel it in your temples and ears you are feeling a different form of excitement and it's the type that will keep you awake at night.

Pon pons?
The correct English spelling would be Pom-pons, it comes from the French //pompòn//. Now in Italian that became phonetic pon pon and somehow more onomatopoeic (I don't know I feel the "n" have more of a bouncy bouncy feel to it ha ha ha).
Currently Tonno is not doubting the fact that they'll be using Pom-pons for gymnastics. It's trying to figure out what they are by shaking them and the sound he hears (the one you see in the sfx) is pons pons, hence he is wondering: pon-pons?

Sex strikes are an often underestimated form of protest.
The doctor calls it embargo XDD which is far worse because you are supposed to cut all contact with a particular Country in an attempt to isolate it.

I have a feeling he'll go from embargo to strike quite soon.

Actually in America, we call them Pom Poms (pronounced like p-AUH-m or the word Palm in Palm tree). That's how we spell it too. =P In my mom's country they call them Pon Pons also though.(they say it P-Oh-n and really fast) Such a fun word, so bouncy haha xD

Yes, Pom pom is the second most famous disambiguation of the term, and more American English.
But being the word originally French the first disambiguation comes from French... it's a semantic thingy. British English add the dash and then it morphed again.

So many changes! that's actually the most troublesome and yet most entertaining thing about languages. People pick up things from their surrounding area and then it is integrated into the language, causing all sorts of funny little quirks between regions. Personally I agree with you though, Pon Pon is far more fun to say. X}

American English is one of the most fun, in this case, adapting and morphing words. I remember when I was studying History of the English Language and semiotics that American has lexicon that comes directly from dialects (Welsh, Scottish, Sicilian...) and other languages and did not go through the second bit Vowel Shift. Also it kept the periphrastic do like the XVII century English.

*researches* Whoa! I never knew about the vowel shift bit. I do know about the lexicon bit though. English is such a complex language, I read an article somewhere (I believe in my Shakespeare class) about the area around England, Wales, and Scotland being taken over by the Francs at one point. They stated that due to that, that's where a lot of the wording comes from. Also, something about French being the language of the court? I don't remember too well, it's 4am and my brain is a bit fuzzy @w@;

(also, thanks for taking the time to respond to my word silliness =P)

Anyways it was the language of the court that's why pork is raised by Saxon but swine (French word) is eaten by the Normans - or says Sir Walter Scott in Ivanhoe.

The first great vowel shift happened 2 centuries later then a second wave of latin terms (the first wave came with the Christian monks in the III to IV century - they introduced Paradise and shifted Heofon (sky) to Heaven... hence the poor people needed a new word for the Sky and borrowed it from a Scandinavian language - that's how the letter "k" reached English).

During the XV century another wave of Latin words arrive through Italian which was, back then, the most spoken language in the World, kinda like English today. That's when a second minor vowel shift happened.

or something like that...
Go to sleep now! XDD

Silly detail, but the original French would be "pompon", whithout the accent. In fact, the only accent that can be used on an o is this one : ô. All the other accents can't be applied to o - well at least not in French!

Sorry, I meant to give a phonetic reading, because in English the accent falls on the first "o", but chrome did not copy the brackets. ^^"

I shall add them now :D. (Sorry, I do not have much time to reread my articles recently there might a huge amount of mistakes in there).