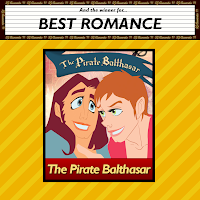 Yes! This is the news we've all been waiting for... (I don't know about you but I was waiting for it! Muah aha hah ahr ahr choke choke).

I wanted to thank you all for voting the Pirate Balthasar as best romance at the Smack Jeeves awards. It's a tough category and the competitor were much more popular than popular itself!

Also romance is a category that is never taken seriously because most people think that romance = cheesy or no-brainer structure.
Most chick flick are labeled as such and are underestimated but, as I keep telling my students, most of those movies have the most sophisticated structure when it comes to storytelling (how they are developed afterwards and if the dialogue sucks it's somebody else's fault LOL).

Let's not forget the origins to romantic comedies have some balls: from Shakespeare's quarreling couples (and even further), to Jane Austen standards to Frank Capra and his wonderful movies!

Romance is a strong force in the universe! We shall ride it the pirate way!
Thank you!
Posted by dedasaur at 2:10 AM