Giovanni Battista Hodierna was a Sicilian astronomer.
He is not very famous but his works were quite outstanding.
He was impressed with Galileo's studies and continued on his footsteps and a lot of his speculations were actually quite correct.
"Of the systematics of the world of comets, and on the admirable objects of the sky" was probably the book Kane is referring to.

Tramontana is none other than polaris, the only fixed star in the sky, the North Star.
According to the system of navigation devised in the Mediterranean Sea , in the Mariner Compass Rose Tramontana indicated North.
Castalia is probably pointing at Jupiter, which is the 4th brighters object in the sky. Usually September is favorable month to see it in the sky... I think in 2010 Jupiter was the brightest object visible in the sky!
Kane asks for a fixed star instead... his request is quite romantic! ;) 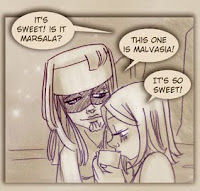 How many sweet wines are there?
So many, you have no idea!
Now, in this case the Malvasia they are drinking might not be as sweet as it is today but still...
Malvasia is very common in the Mediterranean area and there are different types from white to black.
It's quite different from Marsala but for me it's hard to describe how... 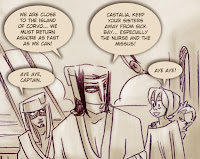 Somebody asked me about Corvo but I forgot to answer.
The names of the islands I pick are mostly in Italian or Spanish.
Amado, Corvo and Baronetto are the three islands visited by the Aldivento.
Amado means beloved in Spanish.
Corvo means Crow in Italian.
Baronetto means baronet in Italian.
I don't really pick the names randomly, I'm a joker after all, ha ha ha... but I have to say that the name of the first island is the funnies! :P
Posted by dedasaur at 2:27 AM