Why Balthasar is so... Balthasar?

I want to show you a little bit of the history behind Balthasar... the stuff I always talk about (I wish I could show the stuff I did back in 1989 but it's somewhere in Italy and it's very ugly looking soooo... lucky you!!!).

When I was in art school, from 2000 to 2003, I was known as the pirate gal... you can ask any of my friends... all I did for homework was about pirates! I think, back then, Pirates of the Caribbean wasn't even in the making... rumors arrived the last year I was in school and the movie right after I graduated.

Funny enough, when rumors spread, people started drawing pirates too and they would stop me in the hallways asking me questions about this and that ship, swords and other things.

But before that I was the absolute pirate queen! ( insert PRIDE =_= and hero pose here) 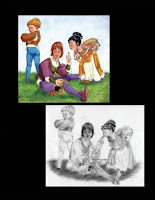 I used classes to do my own visual development for my stories and I had many... from the Pirate Balthasar to The Other side story and The Angel, The Pirate, The soldier... Kidnapping Caesar, Daddy Home for Christmas... so so many. I did costume design, illustrations, concept, character design, animations, all I could... I used all of my stories to turn my homework in something I could like.

These are my baby pirates for "Daddy Home for Christmas"... I definitely painted this waaaay too fast and on the wrong type of illustration board.
My teacher helped me fix the hairdo and I owe it to her if I know about just how much I can get away with... today... haahhaha. 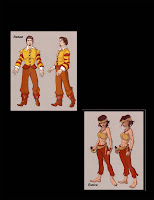 Eunice and Ramon were in my story: The Angel, The Pirate, The soldier.
I wrote this story for my Narrative Storytelling class, also known as English 1. My teacher said that he missed his stop on the way home, on the train, because he was caught up reading it hahaha... even though it was full of spelling mistakes! He was nice enough to fix it for me and give me an A. Richard was the best!
After that all of my Color and Design and Character Design assignments focused in this and The Other Side Story.

As you can see... Eunice could be Cat's mom. She has golden eyes and the hair sticks out of the headband. She is also, somewhat, very similar to Castalia.

This fella here, by the way, is not Pifo ... this is the Nicco who cane be considered Pifo's dad.
While this and this... are some version of the Balthasar before Kane and his dad, Villie Van Hood.

In 2006 I was going to put my hands back on The Pirate Balthasar... following the old style and time period I had set for it. Almost one century before the year I choose now. I think it was 1580, then it became 1603... and then and then...
It looked, to me, like a design disaster: I could not manage a single drawing out of my sketchbook that did not look stiff, angry or simply too polished to be alive... drawing stuff too complex to be animated is something you cannot see yourself doing, after many years of animation... and
besides... let's think about it... look at Disney's cartoons... some of them don't even have fingernails (like Pocahontas) and in Lilo and Stitch... after realizing that drawing details on Nani's shoes was insane... they just simplified everything (they change it halfway through the movie).

So drawing hair, every single tooth, every single wrinkle and knuckle, every lump and bump might be, realistically speaking, stunning but... also stiff. Simplified drawings can be squashed and stretched and can be much more expressive because they are not caged by anatomical structure. (Tezuka figured it out, instinctively) Simplification is one of the main rules of animation. I simplify a lot.

These are the 12 principles of animation:

And my mind set switched completely into the story boarding slavery of only wasting 3 minutes on beat boards and then no more than 5 when you go to production boards.

I am still in that mind set. If a drawing takes more than three minutes I scrap it and start over because something has obviously gone wrong... and then I spend a couple of more minutes to make sure that the clean up is tighter. All I have is two hours per day to make a page! T__T and the rest of the time I have to spending doing everything else.
I would probably still do this even if my life depended on it... it's a habit.
Posted by dedasaur at 6:55 AM