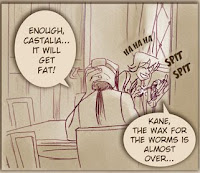 Galleria Melonella is a caterpillar that feeds on honeycomb: they are like fat white caterpillars with a brown head. They are used in the pet industry... if you own a lizard... because they are very fat and have high caloric content. They apparently taste sweet.
Don't ask me how Kane figured out he could breed and feed them to the pet. He probably figured out they are easy to breed and maggots are too small. (there a smaller version of this insect and it grows inside of flour bags).
Eventually if he gets across a cricket or a fly he would catch it too. Variety in a pet's diet, is always good and makes them healthy.
Apparently Fickle likes them a lot, he must have a sweet tooth.

What do you girls call your Red Harpies?
Mine are called the cherries... that's because if you eat too many cherries you get stomach ache and... also... of course... cherries are red.
So see... by the fact the girls are approaching their period we know that a month has almost gone by since chapter 5. Wow!
With that sentence Lio is saying to things: 1) Foxy must pull out ^^" (sorry, kinda brutal) 2) she is not for intercourse during those days! 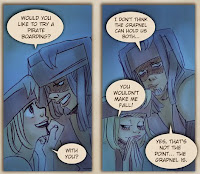 A pirate boarding... ooooh.
I always wanted to try one of those...
Actually the grapnel, attached to a rope, were more used to pull the ships together.... it stabilized the boarding.
I wonder when in movies they started showing pirates flying around attached to a grapnel... how big must a grapnel be to hold a pirate?
so, duh, sorry for making fun of that but a grapnel might hold Cat, since he is a short boy... but two of them? I wonder.... we shall see.

Apuleius... guess the story she is referring to?
Of course it's another story about kidnapping: Love and Psyche.
The Metamorphoses of Apuleius also known as The Golden Ass (pf course she got the animal right but felt bad about the world ass)... follows the adventures of this guy, Lucius, who gets transformed into an ass (actually he does it himself LOL so he's kind of an ass). During his journey, filled with adventure, he gets to listen to some tales as well... one of which is the story of Cupid and Psyche, contained in book 4.
At one point of the story Psyche, kidnapped by Eros, Love or Cupid - the dude with the wings!!! - and whom she has married without even knowing his face... is kinda convinced by her sisters to spy on him during his sleep.

"Yo, girl, what if he is a monster?" They say... so she does spy on him, even though he told her not to, and even though he treats her nice and gave her a beautiful house and beautiful things... she spies on him! But the oil from the lamp drops and burn him on the shoulder and he wakes up and flies away.

Supposedly it's a story about trust. If you like him and he is nice to you... does it matter who he truly is?

Yes, it does! Are we joking? This is a tale about women's obedience and submission and devotion!
True love my ass! Do you know this dude? What if he is a serial killer? Why should you just trust someone blindly... just because you love him?

But the whole conversation between Kane and Castalia, here... is about trust. He found a delicate way to ask her to trust him and she answered that she wants to be trusted in return. Do they jump in the water without knowing if it's cold or hot? No, they are feeling the temperature.
Let's see if it rises.
Posted by dedasaur at 7:55 AM