There aren't many curiosities this time around... except for few silly things XDDD I blurt them out, then you can make fun of me for ages to come!

We finally discovered: Castalia is a Bengal Cat. A spotted one probably! Ever since my friend got one... I have taken such a liking to these animals... because they look so wild. So I did some research on them and got to like their personality even more. They are feisty! That's when Castalia took a turn LOL. And for the one person who actually figured that out on Smack Jeeves... you are a genius, my friend! Got the breed of the cat spot on! XDD I was laughing my ass off when I read your comment. 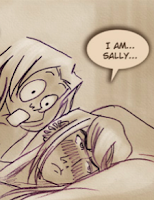 Alright... now we see a bit of Foxy's past.
His name: Salomon... to be pronounced Sal-uh-mòn (accent on the ò since the boy is French). It's like Salmon but not smoked! (Stop it, Deda! You are killing me!).
And... we discovered that his family had to move to England at one point and that's why his name took a Birtish twist... a girly one! LOL
It's kind of funny to write about a dreadful pirate with a girl's face and a girl's name! XD 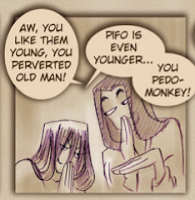 In Italian Habel is saying: you old pig, you!
In English that sounds harsh... so I used perverted old man... but it sounds like a manga. Sigh U_U".
Let's face it though, sometimes manga mean "weirdo" not "perverted"... I am guessing it's a lack of lexicon that turns every single "hentai" into "perverted".
In my case the pedo-monkey is making fun of his brother for getting a wife 10 years younger than him.
But also... if you consider that at 35 a man could be considered old... Kane is only 10 years away from old age! XDD But still 10 years were considered very long! Life was not as fast as today.

Oooh... and finally he tells us what "gioia mia" means.
This explanation could not be left on the blog alone... because not all the readers can be bothered with a link to a blog to get their answers, that's annoying, and besides... if this thing were to be a book, it would have notes at the end... but could you really pester the readers with extra notes? It's not nice... so, although I already answered some of the questions here, in this blog, they will also be addressed in the comic when the time arrives. 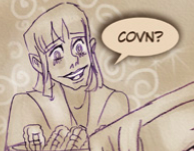 How tough is it to write a summer story during summer? Usually I would be thrown off a bit... but I'm in Singapore! I get to eat watermelon and hear the cicadas sing the whole day and trust me... cicadas here sound like the dentist drill!!!! They sound miserable too!
Corn... lots of corn in this chapter... and corn also determines the month. I told you this is a mid summer night dream - the dream has yet to come and will actually be dreamt in the morning XDD - mid summer in Italy is celebrated on August 15th. That's why it's pretty hot, right now, on the Alidivento... in every possible way.

But where is the corn coming from?
Corn can be picked and dried. You hang it under the ceiling and keep it there... sometimes it dries all the way and you turn it into flour to make polenta and other dishes. Other you can soak it back in water for a day or so and revive it a bit before you cook it. The second option is not always super good unless you know how to do it. But that is how it was done in the past!
Pifo revived the corn in the pantry room, that is why he is below deck, and was taking the revived corn upstairs to the kitchen to cook it when Josh stops him.
Posted by dedasaur at 3:11 AM