Welcome back to our usual date with chapter's curiosities.
This release was a little bigger than expected, 17 pages.
Let's analyze a little bit of what happened.

Kane finally explains what the treasure room is for and how pirates go about it (aside from the punishment part).
If fills up with the stuff they pillage, but they don't pillage very often, only when it gets half empty.
For the rest they spend most of the time spending what they pillaged.
In short what you see in movies is the rare events that used to happen once every few months, when the gold and the rum were gone!
Pirates spent most of their daytime sleeping, were awake at nights and did not sail as often as people might think, looking for adventures.
We know that who comes to live on board of a pirate ship is some sort of renegade. Sometimes innocent.
Life is precious and you don't waste it, you don't risk it, you just enjoy it... because you finally have gold and freedom! 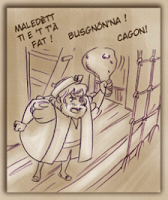 Ah, but we finally get to see what attacking a passing ship is all about.
This is Mr. Hamm, Sliced Hamm... from Parma, home of the Prosciutto.
He is an old acquaintance of the guys, apparently... and apparently he is also the one who provides them with prosciutto, scamorza, salame (mind the wikipedia spelling!!! Salami is plural, but the generic name is singular... salame, with an "e" and you read it salamay!) and other preserved meats and cheese.
What is the man saying? I don't know... I actually don't speak that dialect... I think he is cursing them and he cries for his Parsùtt (not prusutt, I made a mistake XDD)... for ever gone with the pirates.
And Cat explains us: no battles, no fights...
Besides... you are merchants why would you put a fight? You just raise the white flag and maybe life sucks so you ask the pirates to join them.
Let's make this clear: you put up a fight against the pirates - and you don't stand a chance to begin with - when they board you they pillage your cargo and sink your ship. You all die!
So... forget the movies! XD 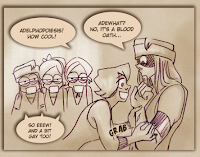 Ah, blood oath!
Apparently Kane does not want problems with women and therefore only hires people with a family to feed (that's probably also a childhood unresolved issue XDDD families first)... but he has 4 exceptions on board: Cat, Foxy, Westley and Quoque Tu.
In fact, so far, the pirates have been talking about their wives and we know from Pea that they are all married... except these 4.
Then Cat says it: we are his brothers! - and shows a scar.
Adelphopoiesis is the Greek word for an actual rite that was called "Brother Making" in latin.
So Cat is trying to explain that they took a blood oath that turned them into Kane's "brothers" and Castalia comes up with the Greek word for it.
Now these rites, at one point, were celebrated officially, outside of churches and male bonding, in the past... were... eer... complicated in fact some gay rights activists states that these ceremonies could be a form of same sex union.
To the girls it's kinda gay, it probably was where they come from too hahaahha. To Cat is a manly thing. Ah, male bonding is something girls don't get!
In a way, what Kane did to these guys is kinda devilish. He binds them by blood: your life and soul belongs to me, now! MUAHAHAHAHAH
I wonder if we'll ever know how and why this came to be.

This is Misery and Nobily by Eduardo Scarpetta.
When it comes to hunger and starvation treated in a comical, Italian way... there's nothing like his play. (CLICK TO SEE THE SPAGHETTI SCENE)
To me it's the most Italian thing in the World hahahaha...
Even though Kane comes out with a complete Yoda line XDD... we get to know these girls have Italian blood too! Mhhh... interesting.
Actually I posted dozens of movies inside the comic, I wonder if you can spot them hehehehe.
It would be a fun game to propose.

This week I introduced two talking paintings! (I am preparing my Art&Film class... it toooootally shows hahahaha)
Lol, sorry Botticelli!
Your guys, here, are saying a bunch of bs' to Castalia... but when Kane vision is turned on... Botticelli imperator mundi (which means... he rules!).
It probably really is Pifo's new diet... but people are getting healthier and most of all the girls are getting nice and plump... and busty and gorgeous and that's enough to drive a poor pirate nuts. 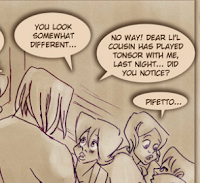 A tonsor is a guy who shaves friars and monks, particularly.
It means barber, yah, but back in the days the trade of barber implied you could do many other things... even be a surgeon at times.
To the doctor, having his hair cut is like receiving and unwanted tonsura but there are other reasons behind his getting upset.
Why would a man of "science" get so worked up about hair... he is definitely not Samson. We'll see...
About Cassandra's ignorance. 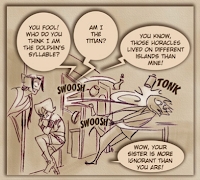 She says Dolphin's Syllable for Delphic Sibyl and says Titian for Pythia.
Indeed those oracles, without an H, lived on another Greek island which is Delphi.
Nowadays we would say something like: you know, I don't have a glass ball or a witch ball... when we want to say that we cannot possibly know about things if we are not told about them to begin with.
Is it Kes' fault for not knowing the doctor? No, it's not... and the fact she does not know him leads her also to a lack of patience, not realizing that the fact he ask to be left alone until he calms down is also a form of courtesy: I know, now, I cannot cope with it. Let me calm down and we'll talk about it. 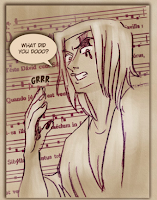 What's spinning in the doctor's head, at this point, is a Dies Irae:
Day of wrath! O day of mourning !
See fulfilled the prophets' warning,
Heaven and earth in ashes burning !
And that's how a Scandinavian piece of hunk goes berserk: you break his face! XDDD

As if it weren't enough... he is taken by the Furies like poor Orestes! <--- if you are wondering if the Oresteia isn't looking a bit too much like Hamlet (actually, the other way around XD)... yes, you got that right! Shakespeare got inspired by many things... taking advantage of the fact that most people, in his times, did not know about the source of inspiration! XDD It happens today, too... but in a bad way! O_o

Gioia mia... is very typical Sicilian expression.
Reason for using this: it means both "my joy" and "my jewel".
Nowadays it's used commonly to talk to people, even if you don't know them: how you doin', gioia?
Almost takes the value away =_= while it's such a precious thing to say...
back when I was young it was mostly used for children and treasured ones.
What Kane is having here is a lapsus, a missed deed... somehow, while taken by the frantic action, he shows his unconscious desire of protecting his treasured one. Someone is getting cute... hee hee hee.
This is it!
Come back for another pin up tonight! :D (and vote for Fickle!)
Posted by dedasaur at 2:26 AM

I know you spoke of the two different things Furies did, but they tortured Orestes in that picture (unless they had seized his mind before so that he'd avenge his dad), so it wasn't really all that fitting...

yup he was tormented and feeling remorseful BUT the saying "taken by furies" comes from that: it means you are so tormented by your anger you lose your mind.


That's what is happening to the doctor... he is tormented by the furies and he reacts to what they say.
Consider that the Oresteia changed in its Latin version and in the popular culture too (he is tormented to the point they drive him mad) so that in the common spoken language the Furies became something else. The meaning of the word shifted to the normal use of Fury, Furious (insane with rage)... and the torments of fury is what drives you mad.
It's a basic semiologic analysis.