Guess what? I'm telling you...

Thank you all for playing this little game with me. It was fun!
Actually one of the painting was guessed correctly: the very famous and gorgeous looking Kiss by Gustav Klimt.

Here's the answer to the Guess What little game. 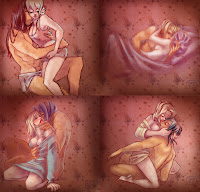 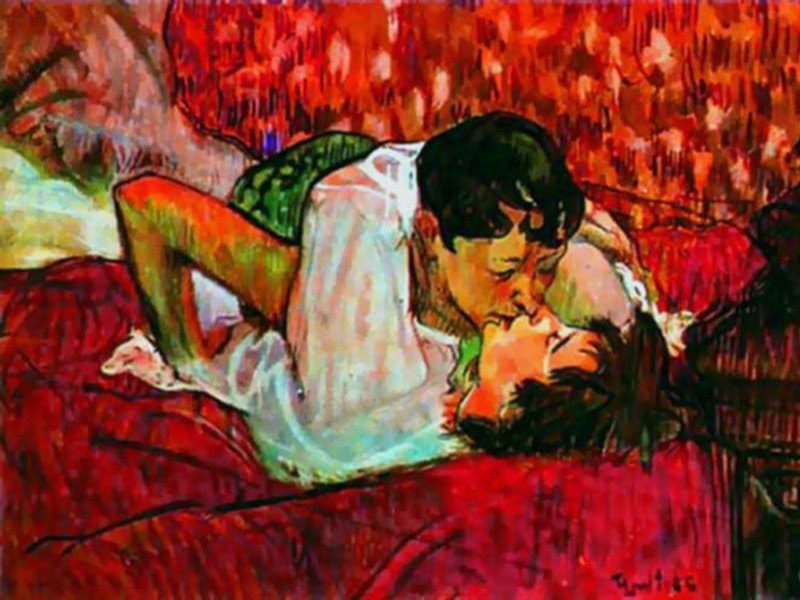 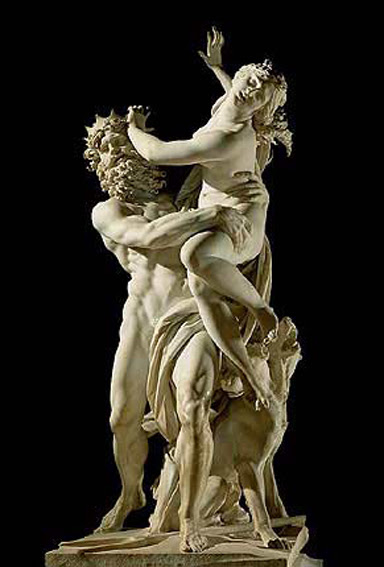 In bed, Kiss by Toulous Lautrec

The Kiss by Gustav Klimt. 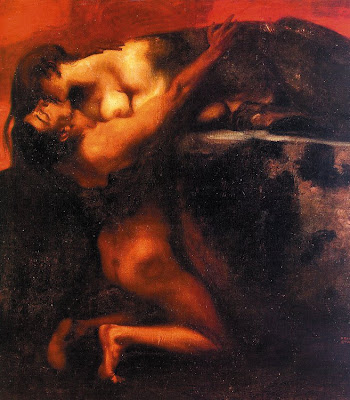 Kiss of the Sphinx by Franz von Stuck.

when dealing with art and drawings there’s nothing wrong in finding inspiration from what people before you did. Somehow you could be as presumptuous as to think: it’s nice… I could improve it.

It’s not like that though, it's not like you really do improve it… you adapt it to your own times and culture, the one you live in. It’s a process of modernization but you are not copying. Copying is when you take someone else’s work and reproduce it to the extent it is very recognizable.

But when you take many many people works and have this baggage of culture flow into your own art… that’s inspiration.

So I was sort of commissioned this set of illustrations called “too darn hot” (title of a Cole Porter song, of course, who else should I pick? he inspires me a lot)… and even though the Pirate Balthasar, at least up to this point, sounded and was very romantic… to me… dealing with love and certain types of human emotions is complicated because I don’t share them.

My interest in it concerns the building up of the sensual tension and then the chance to spoof it or break it to pieces with comedy - without making fun of it. I like to take a character… build him as this hot, cool guy and then destroy him and give him humiliation because, you know, hot babes (male or female) poop too - yes I said the word “poop”, we all giggle here and then continue reading XD.

We all poop! This makes us humans and the god-like quality implied by images, for me, is destroyed almost immediately by this idea.

Brad Pitt? Johnny Depp? The moment I see them… I imagine them on the toilet :D

Sooner or later I’ll put on the toilet every single character in The Pirate Balthasar.

But let’s go back to inspiration… because for me it’s difficult to portray passion or love (those who know me… could tell you: I’m not a believer!). I use observation and rational thinking and Art. Because I like art and so my comic, so far, has quoted dozens of movies, paintings, sculptures…

By the way: Rodin’s kiss was in fact used in the comic. Wes and Kes kissing on the stairs… it’s Rodin! I am glad you like that statue too… I spent two hours in front of it in 1998 and it was hard to remove myself from it! It’s beautiful.

I hope it was fun for you too!

Just wanted to clear up something that for some reason confused me. You said you're not a believer. A believer in love? No judgment or anything everyone has their own opinion and such. Just wanted to make sure that I understood correctly. For some reason the way you said it had be me confused.

You know that song (the one that's been used for Shrek too)... "Then I saw her face and I'm a believer"?
I was referring to that, using the song! In that sense I am not a believer... for me, it's much easier to write a scene with Pifo and Rose than one with Wes and Kes, for example. I struggle a lot with human emotions.

Oh ok. I understand and I know what you mean.