A very good day to you, my dear friends... so, it seems like Pifo is no longer enganged... his second fiancée, Cassandra, apparently has the hots for another guy. That's cheating, you know? And doctor, you too... how could you? Poor Pifo!
Anyways... Pifo seeks love... anyone interested? Write a line here and I'll forward it to him. A Pifo is a good thing to have around the house.
This week's release travels on parallel tracks. This will come to happen more often, from this point on, sometimes I will make it obvious, others... it's diluted and you have to pay attention.
Are you an attentive reader?
So kisses are they unconditional or do you need to put conditions? 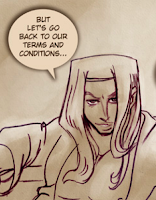 Apparently for Castalia, being the transparent girl she is... asking or swapping doesn't work. She tried. She got something out of Kane the first time... she got the treasure room the second time... she got yelled at the third time. So she came to the conclusion: no, kisses have to be spontaneous.
The doctor... he would cheat his ways around.
The kiss has a condition: you kiss me. You lost... the fact that I cheated doesn't make you less of a looser. LOL
Our Smooch sound effects works as a transition between an unconditional kiss and the one with conditions. Keep an eye on the chapters were Kane and Westley are dominating: they walk on parallel paths from now on. They walk in opposite directions. 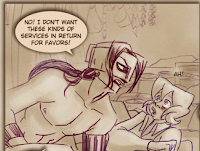 Wilson Kane is such a bigot and a moralist...
No... he couldn't care less.
What he is saying right there is not for Castalia's sake... it's out of his own selfishness. Castalia needs to be more delicate about certain things.
Come on! The man just told you his mom was a "pro", he just told you that her profession killed her, he just told you he doesn't want another mama in his life...
You offer him something very similar to what he's been staring at for the first 8/9 years of his life. "Sir, could you please help me, my kids are starving?" "In return for...""Myself."
So when he asks Castalia: what do I get in return for helping you out... he is not actually asking for something in return... it's his contorted way for asking: what's in it for me?
His contorted way to tease her, pretend to say no, but then whatever... he is just joking.
He gets the one answer he does not want to get. In a way the most offensive part is... being considered just like his mother's clients!
"Why would I want that? Do you think I would want that? Am I like them? Do you think I'm that kind of person?"
No.
And why do something so offensive right after she threw a curved ball at him, twice! She told him she cares for him and that seeing him upset is enough of a punishment.
Hey, but the girl gets reactions out of him... Wilson Kane is coming to life :D.

Now, onto the actual... useful stuff!
La mano a cuoppo! (the cup shaped hand).
What is he doing indeed with that hand? Shaking it up and down.
A lot of people think that the cuoppo is a very common and generic gesture used by Italians.
If you go to the Northern Regions of Italy you would almost never ever see it (unless the person who uses it has ancestors from the South).
In the South of Italy the cuoppo is very popular. But it is not used randomly... for example, I remember when I lived in the U.s., my friends would shake the cuoppo at me and say: forget about it! Or: How you doing?
The first times I was totally left speechless: O_o what?
The gesture and the messages did not go together. Somehow it's as if someone were to give you the finger and say: lovely weather, today, isn't it?
The cuoppo is a quantifying gesture!
It's used for "what" and "why" and "how much"... consider why to be applied to questions such as: why are you doing this? Which implies the quantity of stupidity contained by your action! XD
Now, not many Italians know this. As the cuoppo is something very instinctive and if you were to ask them: why are you using it?
They would just tell you: it's a random gesture!
Which misleads foreigners all the time! That's why in the end they think that the cuoppo is generic and shake it at you in a very rude manner, without knowing how rude that is.
But consider this... there is no such thing as: Standard Italian and Italians are not very aware of what being Italian is all about (besides most of our traditional culture and language is getting lost at a speed that scares me).
Usually Italians shake the cuoppo with a sort of nervousness and turmoil in their hearts. They are mad, they are describing something that upsets them, they are trying to make a point, they want to convey a message across with strength. It is not a relaxed gesture.
Here, Wilson Kane is imitating his grandpa, Cosimo. And grandpa Cosimo is trying to convince the young Kane that being locked up in the treasure room is for his own good. It will make him stronger. It will give him discipline. The cuoppo gives strength to his words: you'll see how much better you'll turn out if I do this to you. You'll see how much stronger this will make you. You'll see how much of a Balthasar you will become.
How much is the key!
I have new Illustrations and Fan Art for you! Stick around. I'll post the first one in a few hours.
Posted by dedasaur at 4:25 AM

The lost traditions... how true.

This post as a whole is among your best :), with a lot of insight not only about the characters, but about the meaning and message you're conveying with TPB. You'll put this post in the special book, I hope ^^.

overall I am hoping that whoever reads the comic will come to the same conclusions... but when I will compile the Artbook I might select some of the best posts to go in there (the sleeping position, for example).

btw I am fixing the website... it's not very pretty but it's looking like something hahahaha.
But I am so bad with banners.

We do the hand gesture here in Argentina too; we don't have a name for it, but it means exactly the same and we don't even realise we're doing it either, it's like a natural gesture and it just blends in with the genereal expressiveness of the people here. Then again at least 70 percent of immigration here during the last couple of centuries was italian so, that's where a lot of our culture comes from.

I had wondered whether Pifo really had to have a wife... I know he's expected to have one, being a son and heir and all... I figured that she'd have to be one who could cope with his lack of actual desire for her, which is reserved for men, and could even use that to her advantage, perhaps by mimicking the voices of his crushes... I'm just stating a personal view, that I'd want someone to be truly passionate about me... I suspected that was why Cassandra's impromptu engagement to him never registered with her...

Cassandra's engagement with Pifo was not established by her father or the person who acts as one. She does not believe in Kane's authority and he is not a father surrogate... therefore he could tell her that pigs have wings and she would give him the cold shoulder :D

The moment you establish someone has authority then whatever he says has value to you... but he is just a pirate and whatever he says has no value to her.
On the contrary Pifo has instantly recognized Kane as the alpha male and also whatever he said helps him continue his little delirium... and probably he thinks that his fiancee is somewhat of a BFF too XDDD