Here we go... we finally know why the girls have had a nice, quiet and safe life on board the ship: women are sacred!
It might sound odd but pirates, even though they are to be considered one of the most democratic societies of all times, had very strict rules when it came to life on board.
We saw part of the laws dictated by Gilbert Sullivan at the beginning of chapter one... but then each captain would pick another set of rules to keep his crew in control.

Because I don't like to sit there and just list the grocery shopping list to you... I will hint at things and you will have to piece things together, by the end of the story you'll have the full picture. But don't ask for the full picture right away, it would clutter things up and only confusion would come out of my head hahahaha... you will learn about things with the girls, as we go along the story because life does not come with a manual and you just have to sit back, relax, enjoy the ride and trust me: your questions will be answered. :D

Some of the toughest laws, for pirates, concerned: women, gambling and drinking.
You could not steal some one else's wine. Gambling with money was forbidden. Bringing a woman in disguise on board was punishable by death. These rules are to be considered: on board... on land you could do whatever you liked (almost).
A ship is a very small place, a closed circle. Everything needs to be under control. On land, what you do with your own money is your problem... you get in brawls, you spend all your gold gambling, drinking and with women. It's up to you.

Society on board is about sharing everything, almost to the extent of a communist society and still keep private property sacred. How can this double standard survive? The sharing concerns common areas and common belongings, like the loot. Once that something has been allocated or given to his owner, though, it cannot be touched anymore... it's his property.

Now when it comes to women... I said once, before, that pirates were rapists... on land (especially the Pirates of the Caribbean, pillaged more villages and cities than actual ships, there they got to assault women, in the confusion)! Maybe while you pillage another ship you might try to get a go but it depends on the woman.
In the Mediterranean area... normally a very nice looking lady is to be sold to a slave market in Arabian countries. For Harems. You don't spoil good merchandise especially if they are virgins and virgins sell for more.
A noble lady can go back home untouched if her family is willing to pay a nice, juicy ransom.
In general, though, nobody gets to touch a woman on board... otherwise there might be mutiny: everyone wants to have his share of fun.

So how comes Kane breaks the rules by keeping Castalia? Ahhh, now is the moment to wonder why the man married a girl he doesn't know... on the spot! Especially after his friends said he is a misogynist. 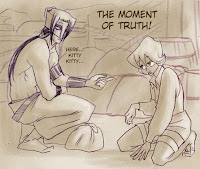 A treasure room is somewhere, somewhat slightly above the water line. Treasure is not only made by gold. Spices would be considered precious, silk and damask fabric, glass, olive oil, wine and fresh food.
Wilson Kane stores everything in this room. Of course there's some silver and gold too but we are not always talking about money... but more about plates, cups and ornamental objects. Some types of ceramic and china too.
What's inside a treasure room is divided amongst the member of the crew before touching land... so that it can be spent during their times on shore.

I am going to make a little joke about this page.
You shall see it in a few days.

You might have noticed that there's a lot of talk about food in this comic.
I am not a gourmet person... but back then food was precious.
Food and gold are almost equal.
That is why food is a good peace offering and that is why Castalia does not smack Kane silly in the head for being kept locked in, with apples, the whole day. Eventually she would not hit him for these types of reasons, that would be more of a Cassandra reaction. She has her own way of getting back at people and sometimes... she does it without even realizing it.

Did you enjoy Kane making fun of his brothers? His turn will come soon! This man has yet to touch the bottom hahahahaha!
Posted by dedasaur at 10:40 AM

Hi there :)
I am new to your comic... I actually just finished reading it all in one go, or as we say in Italian, tutto d'un fiato!
E` solo alla fine che ho scoperto che c'e` l'elemento Italiano.. Sono veramente contenta di averlo letto, mi ha divertito molto! And the art is awesome as well! Complimenti!