Being the stick-in-the-mud it usually is - and one is not surprised it gets hacked too -Sony will soon remove this so you'll find yourself googlin "The Pirates + official trailer"...
This is the totally unrelated post I was anticipating:
Aardmans Studios is going Ahr-dman on us on March 2012!
I am fairly excited!
We finally start to take this pirate stuff seriously again, which means... not seriously at all! Ha ha ha.
I honestly can't wait to see this poor fella run for Pirate of the year award in the movie and quite frankly, being Aardman one of my favorite studios of all time, there's no questioning taste nor quality here: it will be awesome no matter what!

On another completely unrelated note, but maybe not so much, I keep forgetting to show you one thing.... which is this: 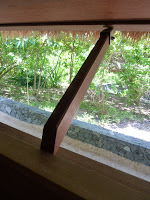 What the fluff is this, you might ask?
When I went to Nikoi, for vacation, I noticed that one of my hatches worked with this system... which is the one you can see used on the Alidivento as well! *_*
So coool.
I didn't know there existed a place where they applied this type of system to their windows!
I thought it was used only on ships, for hatches.
I know it might seem weird to be me so excited about a hatch.
But I always drew it trying to figure out, in my head, how it could have worked... but never
actually saw one! ha ha ha I was so happy!. 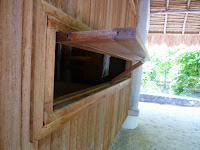 Sooo, this is what it looks like from the outside (you can totally imagine Kes and Wes having their conversation about fever and being socked in "stuff", right?).
It props up against a groove and that's how you block it. 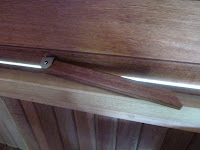 ...and this is what it looks like when it's closed.
So it actually bends AND rotate.
I have to say it works better with small shutters. The one I opened was huge and heavy.
It took me for ever to open it and when it came to bringing it down... I could not make it!
So room service had to take care of that for me hahahaahha.
I'm a weakling pirate!
Posted by dedasaur at 6:17 AM