I haven't updated my links so I will do it today.

Here are the curiosities for the beginning of chapter 14 and the special.

Wes and Kes talk about corn - it's a corny special after all.
Somehow they are referring to different corn but, at the same time, Wes' reply answers to Kes' question perfectly.

So, see? Misunderstandings can be used to our advantage too. 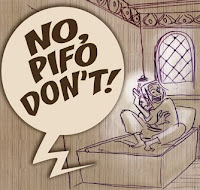 The mood of the whole scene is awkward until Kes finds it in her hear to ask the question that's puzzles her.

First of all the doctor is still traumatized by the haircut - the last time somebody sneaked into his cabin, his beautiful hair was gone...
Then Kes tries to hide the fact that she kindly removed the book from her hubby's chest - still not completely honest or sure of herself, is she? 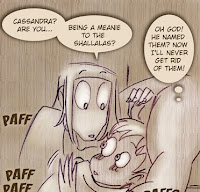 About this... actually she is wrong.
She first named them and mentioned them to him when they first had breakfast together.

I don't think though that Westley sees the Shalalas he saw HER turn into one a couple of times "he's ourssss, you're oursssss" pants off and stuff. LOL

They might have talked about it, after all we don't know what they were giggling about during their first night ^_____^ (supergrin). 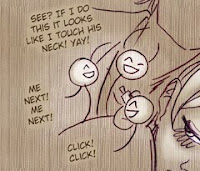 I like to stand in front of far object and put my hands up so it looks like I am holding them. So, for example, I have a stupid picture of me holding the Hollywood sign (who doesn't?), pushing the Tower of Pisa (who doesn't), groping David's butt (who... ehm... doesn't?).


Down to chapter 14: Dysentery.

It used to be called Flux or Body Flux (did you know? Sir Francis Drake died of it, that's why I picked it). It's a common sailor illness and affected many pirates.

If it's not cured properly it can be fatal. 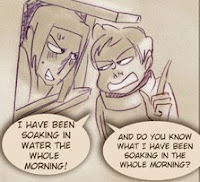 Although our doctor might not know about the origin of the illness he knows what Flux is (but I decided not to use the historical name here and use dysentery instead to avoid the same question over and over from the people who don't read the blog).

So "the bad humor" of the illness cause diarrhea and vomit so, the poor doctor, is covered in something quite disgusting and wants to keep everybody away to limit the problem the ones he quarantined in his sick bay.

To Kane and the others this is mostly a problem of hygiene.
Somebody did not use the hands bucket after pooping maybe and the bad humors have spread and everything needs to be cleaned.

They'll have to refill on water and food as well (they might be "contaminated") and so on...

In the past a lot of weird things were believed to be true... some of them were true but were called with a different name. Once again this could be a misunderstanding use to our advantage: they might not know what causes dysentery but surely they have developed a system that helps even though it applies... to humors! XDD
Posted by dedasaur at 2:50 AM