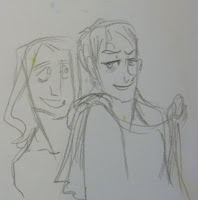 While I debate as to which one of the 3 images should be the cover for chapter 15... (I am opened to suggestions but I kinda like the one in the middle... ooooh the mysterious container!!!!)
I was checking out the polls for the OC characters.
So far it's a war between Allegra and Katharina! I hope you all already chose and voted for the favorite OC.
For the ones who were asking (and I myself did not pay attention, so I had to ask too)... The Smack Jeeves Awards will close mid-August. So you have time to find new recruits to vote for our crew.
Muahr ahr ahr! 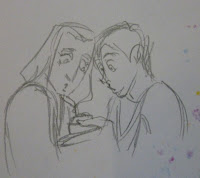 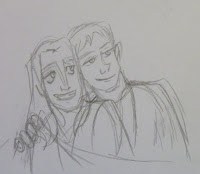 By the Way... Pifo is not stretching anything... it's just that when I draw sometimes I swoosh around and sketch lines that aren't supposed to do anything except measure the distance between the characters and stuff. So... construction lines.
He is supposed to hold a container in his hands instead.
Posted by dedasaur at 1:53 AM

Email ThisBlogThis!Share to TwitterShare to FacebookShare to Pinterest
Labels: work in progress