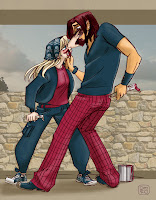 Alright, I gotta run for class!
Give me a couple of hours, so that the caffeine kicks in, and I will post the story-line accordingly.
I must collect my thoughts though, because the story I came up with for Kane and Castalia - since I wanted to maintain the symbiotic relationship and the kittiness of our girl - is a bit complicated to explain.
In the meantime I hope you enjoy the drawing.
I will update this post soon! Do not fear! :D
Story
In the contemporary version of the story, I want to keep the relationship between Kane and Castalia's family, so they have known each other since childhood.

In short Kane and Callimaco are best friends and grow up together. They are both into arts and drawings, movies, videogames and cartoons and have a small workshop in Callimaco's garage. That's where they create their small projects experimenting with cameras and using computers as the tecnology progresses... (no internet except for dial up so time is spent wisely creating and discovering :P).

Callimaco is more of a technological guy, while Kane prefers traditional things and is more into sculpting and welding. Eventually, because they are both very creative and "pioneers", they get into CG, go to Art School, University and get hired into a big Animation company: Callimaco as animator and Kane as a sculptor (eventually he gets into modeling and zbrush).
After a while, while Callimaco continues his career, Kane decides he needs a more relaxed lifestyle to find more time to express himself through his art because he has not found yet a balance and a definite center.
He quits his job, gets into teaching, buys a very cool small cottage outside of campus and divides his days between teaching, sculpting in his studio and swimming at night.

Where is Castalia in all this? Well, she has been there with the boys all along, being always very close to Callimaco. She is also very artistic and talented, an enfant prodige, and helps the boys in their experiments. She is very much into pirates, everything she draws is about pirates, she writes stories about them, even makes a comic (where she turns all of her friends and family memebers into pirates or so) where Kane is absolute hero... because she simply adores him.

In fact, ever since she can remember, she has idolized her brother's friend and she jumps on him whenever she sees him with big sparkly eyes. So Kane grows up with an extra appendix called Castalia... soon to be nicknamed: the backpack!
So imagine him, since young, walk around with Castalia attached to his leg, then his waist, then his back...
It becomes so natural, at one point, that it feels weird when the girl is not around.

When Callimaco and Kane's path are separated by diferent career choices, Castalia still follows Kane around more than she would her own brother. She has become a little pirate herself (both online and on the street - she is into graffiti)... eventually Kane suggest to her to go to school and don't waste her talent around, she should share it with the world!

She enrolls in his school but he forbids her from taking his class. They still get involved in a project for a school mural... and all the designs she presents are verymuch like a tag and not personal enough... he wants a mural instead. So he tells her that she should pour her feelings and her storytelling abilities in her design which she finds a bit difficult to do because that would imply that Kane should be the main subject in her mural (which he also forbid).

Eventually the fact that they show up in each other's art cannot be avoided, it's always the case when artist team up and live their lives and art in tandem: you get feedback, help, a different point of view a free model and a fusion of two styles that, together, create a third, awesome style!

Eventually Castalia would have sleepovers at Kane's house, like they always did when they were kids, where they watch movies, play videogames or draw each other... (sometimes she tries to sneak in the bathroom to draw him under the shower). Kane knows about Castalia's feelings for him, as she voices them often, at times he jokes about them, other he teases her... and overall he admits he is not completely immune to the same feelings either, but he explains her that if their relationship changes and something goes wrong they will lose everything they have and he definitely does not want to loose that because it's too precious. (now imagine him saying this to a crying kitty, with big kitty eyes, crouching on a chair, meowing like a baby and niagara falls style tears - while he explains tha this is exactly the kind of things he wants to avoid).

So see Kane is all about a quite living, a bit like an old man, enjoying his retirement and strongly believes that he needs to reach a state of peace in order to be able to create, because art is not born from chaos... but this steady life not really helping his art either and he feels frustrated about it. So, at one point, neither of them is going anywhere with their projects and their art, because one of them is too frustrated and the other one is not frustrated at all...

That's when Castalia decides to stay away from Kane to find a moment of peace instead and a little space of her own to focus on her mural... and Kane finally finds frustration.
--- in a way consider what happens here a perfect mirror to what happens in the comic... only it spans across many years instead of a few months :D ---
Posted by dedasaur at 1:50 AM

I like the storyline! Its a bit of a different feel compared to the others. Mainly because I had expected Kane to be the who falls for Castalia, not the other way around. I can't wait to read and see Foxy and Lio's!

Actually in the comic he does not fall for her for very long time and does not realize he is in love until chapter 8. It's quite impossible for someone like Kane to feel love at first sight, he finds her quite interesting and he think her dangerous too and he marries her on the spot because he has a plan - to trade her away for something else - and Castalia is totally aware of it, that's why she tries so hard to make him fall for her.
When they have their first confrontation - after the conversation with Josh - she states so herslef, that she knew, but hearing it from his mouth was quite hurtful and bites him.