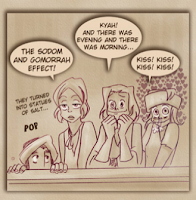 Alright it's time to answer to some of your questions!
We didn't have any! It's alright I'll answer anyways! Muahr ahr ahr!
Let's start with the Biblical references...
Apparently these girls, when they joke, they like to be smart pants! XDD Unfortunately for them... Pifo was the source of all their knowledge and, sometimes, they get mixed up.
For instance... Pea uses Sodom and Gomorrah in reference to the statue of salt (that's what happened to Loth's wife... while fleeing the city... she turned around, maybe felt regret, was not forgiven for the action and got turned into a statue of salt).
In Italian when you say that someone is very very very very surprised... frozen by surprise... you tell them: did you turn into a statue of salt?
Therefore Pea uses that sentence to mean that Kane and Castalia look as if they were frozen and taken by surprise. Unfortunately for her those cities were more often referred to... to... mention the unmentionable sin of homosexuality, particularly Sodom. While Lio goes all Genesis on her joke... and it was evening and it was morning... meaning that they could spend hours standing still like that - so taken they are by the other. LOL

We discovered now that Callista never spoke too much but actually had interesting things to say all her life. What do you know? The girl is actually knowledgeable!!! In fact she probably read a lot and uses a Latin word to describe, in a very unique way, what she seems to read as a sexual or close relationship. Little does she know this word will indeed become the root for the English word: intercourse.
We deal with malicious people so even though she uses a complicated word that means simply "very close relationship" they still get the message right: she means sex.
Now... I hope you are not too fond of those kinds of movies and manga were the spectators see way too much in what they are looking at. I am referring to those kinds of manga like Garasu no Kamen (of which I am a huge fan) or those action movies where people comment: dear Lord, it's not like they are dancing... it's like they are flying!! - and they even go to the extent of imagining wings sprouting on their backs. Or: it's not like they are fighting, they are making love!
Let me tell you... the duel got sensual, yes, but the comments were there to make fun of the whole "smart pants spectator" you usually get in these kinds of shows... in fact Lio voices my opinion very clearly: that's not sex it's just foreplay! (which is the joke I usually crack when I watch those movies... I also quote Woody: "that's not flying it's falling with style!" - at times... especially when I read Swan! LOL)
Didn't mean to pull anybody's leg. You still get pretty hot, steamy duel... I just wanted to get the sexy duel in there and make a little fun of it XDD.

This is a beehive stitch. It's used to crumple or make fabric go elastic.
It's used to ruffle things up. Probably it's the reason why Pea's sleeves look so pretty!

I talked about the duel here.

These are all fencing steps and moves.
Second and trust and the firm foot: they are all position or moves they are talking about.

Apparently Kane is knowledgeable in the Alfieri school.
Here's the cool thing: Castalia recognize it.
How so?
The Alfieri manual was published in the year 1660. Probably Kane got the book and read it. He is very updated in theory!
Castalia is a practical fencer. She did not read the book, she practiced the school's technique. So... way to go Hans... you could not defeat her but you did teach her something useful! XDDD 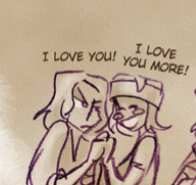 When Cassandra is not around the Devilish Duo cannot take action... or can it?
Seems like the Devilish Duo works in a way that favors the Devilish Duo but... Lio and Callista are a duo as well.
We have never seen them in action before but now that Callista talks we'll see more of it and... this other duo is more of a comedian pair like boke and tsumokki. This is just the beginning of their career and seems like Kane... is an ideal topic for their jokes.

Yes, this is indeed the Little Mermaid. One of my favorite movie of all times... got me started in art and I wanted to thank the movie for being there and still drive me so much. My mother keeps saying: you sit at your table and draw and sing that friggin' mermaid song every day and you have been doing that for 20 years. Aren't you tired?
No, I love Mermaid! --- but this scene (and many others) always puzzled me when it came down to story telling... and just because I love something with all my might it does not mean I have to be blind or fanatic about it. She meets the guy once and goes: lallaaa part of your world for the rest of the movie.
Some movies don't have time to set things up and so they rely a lot on narrative compromises. I never got the magic completely drilled into my head so I either joke about what I see, make up my own dialogues for fun... spoil the ending bursting out loud: oooh I seee (and almost get killed) or I keep pondering: is there a way to make this beautiful concept work?
I have been doing this since 1989... I don't think I can stop now.
To me such a meaningful scene, so beautifully lit and soooo moving and romantic (I fall in love with the movie every time I watch that part) can be used in a different way. So I tried to catch two birds with a stone. So far I put all of my favorite movies in the comic, to thank them for always being there for me when I needed a good story to keep me going... I wanted Mermaid to be in it too.
Here's how I interpret this thing: what Kane comes to realize is overwhelming. In an effortless way he had managed to give Castalia all she ever wanted without fake promises or selfish gifts. His ulterior motives never did lead him to think: I'll make this girl like me and if it breaks her heart who cares. And because he was straightforward and not so perfect he becomes perfect in Castalia's eyes.
Now, Castalia is someone who's been working her ass off to deserve the spot she thinks she should fight to conquer. Little does she know... when she tries too hard she fails and if she is opened and frank she makes his heart skip a bit. So if she is straightforward and not so perfect... she becomes perfect and wins his heart in an effortless way.
Kane gets to spend so much time with her and he gets to know her so well, because she is transparent quite frankly, that he even manages to figure out what Castalia did think and what the answer to Pea's question should be.
It's too much and he faints. When he opens the eyes again... he opens them to a new life. The first thing he sees is actually Castalia's face and that's the face of his future. It's not someone he's just met... she's someone he got to know well and fell for. 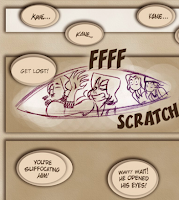 I was trying to achieve that state of confusion one lives when he looses consciousness.
The sounds are muffled and distorted and you blink a couple of times seeing white first and then black again before you begin to put images on focus. When your eyes are closed you hear all the sound with this weird echo effect... and when you open them, even for a split second, what you hear sounds broken - because your senses can only focus one at the time.
So Kane goes from badump to bastump and then is out for a few seconds.

I don't know if I mentioned this before but I chose this time period because it kinda went through what we are going through today.
Big economical crisis. Unfortunately the pirates employed on the Thundering are either part timer or temp workers. Poor fellas XDD but one of them still managed to get to his retirement. I hope he settled a nice retirement plan else he'll be old and poor XDDD

I found what the ending was to Lio's quote, and it's very fitting...
"..and there was evening, and there was morning..." and it was GOOD!

but that would change the meaning of her joke. ;_;