Vasate to everyone the Sicilian way! ^__X/
Did you enjoy the release?
There's only one curiosity this week, it's the: kiss on both cheeks greeting.
If you go to Italy and get introduced to Italians... don't be scared if they kiss you on both cheeks to say "nice to meet you".

Hellos and goodbyes are expressed in a very physical way in Italy. Of course in the South all the more so!!! Hahahahaha. During flu season... it's like Hell! Germs spreading like crazy!

I'll make it clear and short about the Special: It's a musical number from a musical called "The Pirate Balthasar"... LOL The musical had 12 songs overall... ("Nice Rascals" was about Cat and Foxy introducing themselves, "have you ever met the great pirate Balthasar" was Castalia's song - it will return in the comic, sang by the crew, because it's fun LOL - then I had "I hate potatoes" of course, Callista's song and many others).

The song is very melodic and on the arioso side... but the original musical number was very acrobatic!
If I can find the time and silence to translate the song - the Italian version is attached to the end of the special in pdf format - I will try to put it in English as well. Honestly my English is not good enough to allow me translation, rhymes and reasons LOL so... I have to confess it: it flows better in Italian! ^^"
-------------------- 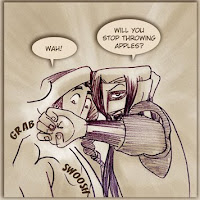 What's up with Castalia? What's with the apples and the cat thingy?
You know how Spiderman has spider senses? Well, Castalia has Bengali Cat senses LOL!

Why is she so tense and aggressive?

Honestly we still don't know much about Castalia and where she comes from... but consider the fact that she spent most of her life forging swords for one purpose: to challenge Balthasar, take his place and go see the World!

She probably has an IDEAL Balthasar in her head too. Plus let's piece a few things together here: she knows her father lost her at a game of dice and is not surprised, she knows that a Balthasar comes with Alidivento and is the Duke of Badia. How does she know all this? Why is she so stuck on the pirate Balthasar?

Let's think about what we know. We know that Papadopulos, Castalia's dad, is the former Pirate Balthasar. We know that he lost everything to a game of dice. We know that Castalia has Italian blood too. We know that these girls are treated very nice on Kane's ship... way beyond normality... and seem less scared than what they should be. What makes them act so cool?

Now, Wilson Kane is the grandchild of the original Duke Balthasar... he stated that clearly. He acts like a Balthasar should and says: a Balthasar is perfect. Plus he wants to continue the family tradition. We know this too.

So Kane represents everything Castalia wanted. He has what she wanted.

It's getting complicated... isn't it? We'll have to wait for more explanations coming from Castalia and Kane themselves who, right now, are walking on delicate grounds because whatever it is that they are feeling is interfering with what their original plan was.

Being a pirate Balthasar is not a simple thing.
We still don't know much about it... we know that everybody wants to be Balthasar... but then being a Balthasar means so many things: having tons of enemies, not being able to trust anyone and always being on your guard to catch apples when people throw them at you in a sneaky way.
So far Kane has been on his guard even with his wife, always sharp, always vague... and then, all of a sudden, his brother shows up: he laughs, gets relaxed and seems weak. 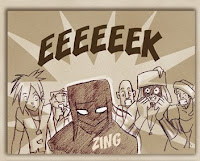 Can Castlia catch him off guard? She cannot. He grabs the apple.
But his brother gasps... his brother, when tested, is unfit for the role! What role? Let's talk about it...

For someone as scary and nervous and moody as Kane... - remember this part in chapter 2 was kind of a prelude to what we saw in "love or hate - the pirate way" - it is very important to be surrounded by the right people. 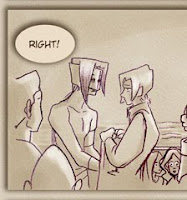 He picks his men. He makes blood oaths with them. He owns their loyalty and soul LOL.

Charisma is not just enough to win somebody's loyalty... so there's much more behind what we see.

To Castlia who witnessed a different kind of behavior from Kane's men...

... and knows how reactive and sharp they can be.... because they were selected.... 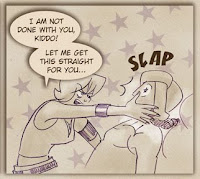 ...the way Josh stands next to his brother is not acceptable.
Let's face it... Kane is still thinking for him, protecting him and pulling him along for the ride.
When apples fly Kane catches them and Josh just gasps!

"Obviously, dear Josh, unlike the doctor, Cat or Foxy or any other of the guys... you were not chosen! You are stuck in a privileged position due to blood ties! Instead of working your ass off and being grateful you just slack it off?" That's what she is thinking.


I know it's fun to start a story with a girl that is more of a tomboy and has big dreams... but let's put the narrative compromise aside for a moment.

We are talking of a society who condemns a girl for having big feet and a family who owns you because you are just a woman. Left handed compliments were very common - it's not like politically correct had been invented - so calling someone Feet or Feetsie (considered a sign of affection, in a way) is no different than saying to a girl: you know, you're kinda pretty for being Chinese! (how horrible is that? What is that supposed to mean? You are pretty or you are not pretty no matter what your Nationality is... Still people say that not knowing how hurtful it could be).

Castalia's behavior is this close to getting her locked up in a mad house. The whole island calls her crazy and she gets locked in a tower one night and the other one too, eating potatoes.
She is finally taken away from that by the pirate Balthasar himself... a very moody and childish guy who could send her jump jump the very moment he gets tired of playing husband.

She kinda liked him before she knew he was Balthasar and girls like to have fun so she was having fun for one night or two... knowing it would lead nowhere. Then she jumps into adventure to rescue her sisters, swimming all the way to a pirate ship, dragging along a very dry Pifo (O_o?) only to find out that this guy is actually looking for her!

And this guy is the guy she was having fun with!!! He tells her he is Balthasar and wants to marry her. She is not surprised to be chosen. She does not ask: why of all the girls on Earth you want to marry me? She knows something... but sure she asks questions afterward: why her and not any other of her sisters. Any of the sisters would do too, right?

He tells her: no, I want you!
That's when she knows that he is scheming something.
Does she care? At the moment... no. It's okay, it works for her too: he will train her to be his first mate but she has to keep him interested.
Does she know how to do that? Not really... she's not the flirtatious type so, sometimes, she is successful and others she fails and is sent to polish the treasure.

Life keeps being hard for her and the current first mate, instead, laughs around and chills and play captain of the Thundering... when he cannot even catch a simple apple.
That's not fair, if you ask me, it's not fair at all! Now wonder she goes berserk!

Thank you so much for the info on Sicilian kissing customs XD. I'm sort of bummed I have not been missing out some customs-sharing action with you though o3o .

More seriosly... ah, well, I didn't really thought too much about Talia's own scheming and motives in the first chapter, outside of the explicitely stated ones. She looked so open with her feelings all the time, even when guarded... instead she wears masks of her own :p. Colour me even more intrigued now :> .

We do the two kisses here in Spain too! It must be a mediterranean thing... yay for double kisses! ^^