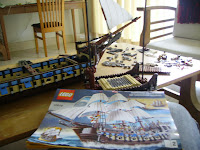 y and actually came back home only at 4pm.
So before I went back to sit in front of the computer again... I've decided to take a couple of hours off and relax a bit with my Lego ship.
This is like... Martin's ship. You know I have a pirate ship already LOL.... but this one is bigger and I just started the second manual... 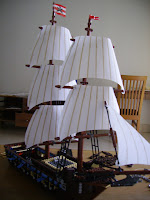 I have to say that it's really big, much bigger than the pirate ship... I wonder how they look like when they are together *_* I wish I could bring my pirate ship here and then... battle! Muahahaha.
What I love about this Lego stuff is that... it's so relaxing! Oh, it just takes your mind off of stuff for hours and you keep putting things together and feels like nothing is happening for a very long time.
In fact putting the keel together is reaaaally time taking. Lots of little pieces and stratification and you have to put things together the right way or the thing does not stay up! 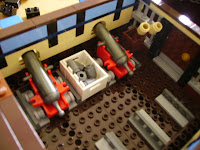 The other thing I love about this Lego stuff is the details... you have to put together little pieces that will come together to form a piece.
You have stuff that slide and rotate and truly work... and then you look inside, below deck... and the cannons have their own little things there... feels like they are ready to go to battle. 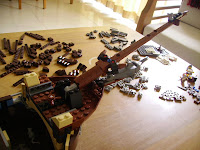 I am guessing the name of the ship is Sawfish.
If you look under the bowsprit you can see the figure head.
It's a Sawfish!!
So hey, officially, from now on, that's what I'll call Martin's ship! :D
Ah, there, if you look at the first picture you could totally see... that you could go to the bathroom close to the bowsprit, like on the Alidivento. 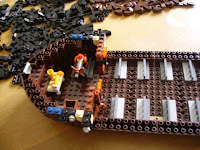 And here's the kitchen. Now... they have it below deck here, while the Alidivento has it on deck... I like the fact that this guy is chopping carrots (how fancy) has dried sardines in a barrel and is even roasting a chicken! (I wonder where he got that).
We only get to eat tsatsiki and shark stew on the Alidivento (except ham and sausages when we meet the ship from Parma!)

This is really cool! Its going to look fantastic once its completed. I get what you mean about it being relaxing, for me its not Lego but jigsaw puzzles =D I used to spend hours and hours completing them