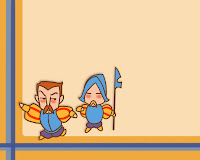 Alright guys... Did you miss the uncle and the spearmen? They'll be back in a nice chase scene! :D Soon... not too soon but soon enough.

Thank you all for registering with the Fan Clubs: 151 people decided to participate so far! It's awesome!

Counting also the people who chose the option "other"
that's how we are going:

Somebody stated ALL that will give extra boost to the guys. Somebody else said 3 of them but left no names T_T so we'll never know and will be left to wonder....

Email ThisBlogThis!Share to TwitterShare to FacebookShare to Pinterest
Labels: Freebies