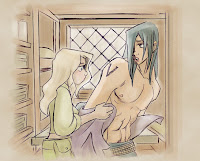 I got an interesting question in the mail yesterday: Deda, what's that V on his arm?
I did not explain it, did I?
Human branding nowadays is considered almost as cool as tattoos but was used, in the past to brand property and criminals. You would brand your cattle and your slaves... the Romans did it, the Greeks did it and up until the 1800 the French and the North Americans did it (then a certain Civil War set the slaves free).


As for the criminals... each Country applied its own method and laws (Wikipedia says that the Germans never resorted to branding... but I know from a certain book that in Frankfurt branding was in use and they use an eagle).

If Foxy were to be British his V should be on his chest and should mean: Vagabond.

But the V is on his shoulder which means he was not branded in England, he was branded in France for being a thief (V for voleur).
Thieves would usually be branded with a Fleur-de-lis on their shoulders mainly... but some smaller Regions would use a V instead.

So our little Fox was a thief and was caught? Yes, he was.
Why is he so ashamed of his branding and covers it all the time, then? Why does he fear Lio's reaction? What did Lio see?

Well Lio saw that the scar is stretched and looks very old, so she realized right away one simple thing: he was branded as a kid. She is not a stupid blonde at all and seeing his embarrassment she asks him: does it hurt? <--- that implies a "still". After so many years, this thing still hurts? It feels like it dominates you.
Foxy is not very clever and answers: it did. He does not realize though that, once he says that, he is finally letting go of the pain and the fear and the guilt... because the judgment he was afraid of did not come. He got understanding instead.

He probably stole just that one time, he probably was hungry, but the law is the law and kids would be branded too, if caught. He shriveled in remorse his whole life for that one wrong action that got such a harsh punishment, yah?
This kind of emotion would solve probably the last mystery: if he was branded in France, why does he have an English name?

Do you guys know what Huguenots are? They were not lucky people at all and most of them fled to England, Germany and other places were protestants were not persecuted.
So, if you are a religious person and steal, get caught and branded... wouldn't you feel that God's punishment always comes to get you and his judgment would follow you for the rest of your life? Even if you change name, Country, family... the V is still there to remind you: you sinned.

Until you don't know what to do with your life anymore and want to just throw it away... then along comes a pirate and tells you: give your life to me, I have better use for it.
Then you meet someone who shares the same burden as you do and that someone becomes your best friend.
Then you meet a girl who dresses your wounds, even the one buried deep down at the very bottom of your being...

Once all the pieces come together to tell you how much you are worth then maybe you'll find it in your heart you can smile at life again. Aren't you dying to see Foxy's true smile? I know I am!
Posted by dedasaur at 3:03 AM