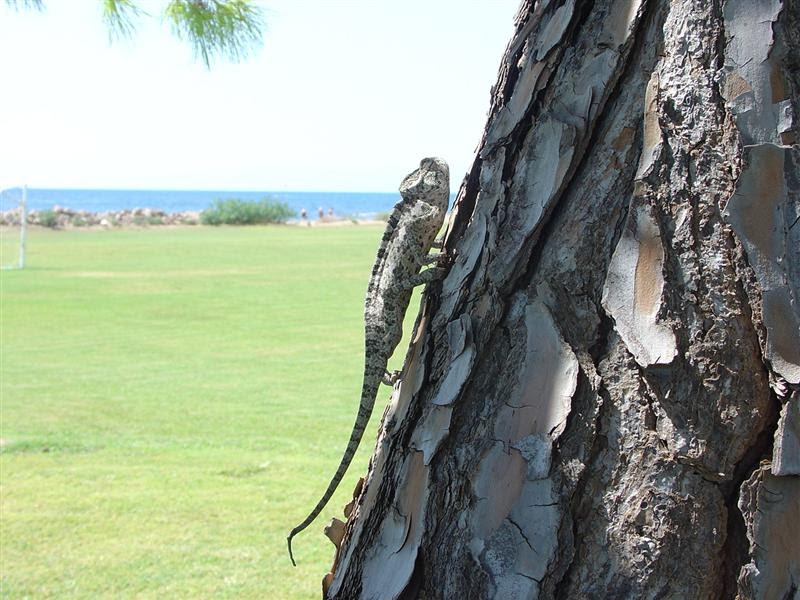 We've seen a couple of interesting things in this chapter.
Let's start with Fickle. (<---sorry the page is in Italian).
He belongs to a particular specie called: Chamaeleo chamaeloen Linneus or Mediterranean Chameleon.
As you can see from the above picture... he is climbing on a particular type of Maritime pine tree that can be found in the Mediterranean area only and looks like a giant broccoli plant. But that's not relevant.
Why is there an animal on board of a pirate ship? Well, we often see pirates with monkeys and parrots... for their own entertainment? It's not like pirates are animal lovers... but pirates, especially captains, have tons of enemies and chances are they'll try and poison them.
That's when the pet comes in. It tastes your food and/or water... if it doesn't die neither will you. Of course, with time, the pirate might develop affection for the pet... it listens to his ahr ahr ahrs and yoo-hoos and doesn't try to steal your money, your woman and your eyepatch.
Because Kane is Sicilian he probably grabbed a local animal that fascinated him and took it along in the journey. So wait... is Fickle a boy or a girl? Fickle is a boy.
If Kane is Sicilian why does he have an English name? You'll have to wait until volume 4 to find out... but I can tell you that Wilson Kane is... his middle name.
Of course his last name is Balthasar (I use the English version because the actual name might be hard to pronounce: Baldassarre) and he is the Duke of Badia, an imaginary Dukedom located in Sicily.
We now know that the Balthasars come from a long line of pirates, that they are actually of noble origins, and are supposed to be servants of the King of Spain but won't.
Why?

The Kingdom of Sicily wasn't always connected to Spain and the history that comes before the Aragonese kings is something they are proud of. Then the Kings of Spain arrive and they get both Naples and Sicily and really care more for the first than for the second one.
At this point of the story the king of Spain is actually Charles the IV, who was not a bad dude, overall... but he did close the brothels in Spain and did not care much about Sicily (two things Sicilian pirates might not like very much, after all).
We can kinda see Martin Steeves sail uner the Spanish flag (it's a silly detail and does not show in color but if you look at the shot where Martin approaches Kane's ship... the San Felipe, to the left has a striped flag - supposedly yellow and red - while the Alidivento, to the right has a triangular shaped flag).
The flag. So... no Jolly Roger? No... Jolly Rogers came in a little later and elsewhere.
Mainly each pirate had his own flag that stated that they would not sail under any State/Government's flag. But... let's take for example the Redbeards (Kahir-ad-dihn and his brother) who were supposedly Turk pirates - but probably Greek but had their hideout in Sardinia. They would sail under the Great Suleimans's flag and were not actually pirates, they were his admirals. They acted like pirate though.
That is because there's a very thin line between an admiral/adventurer and a pirate.
Sir Francis Drake was a pirate and an admiral.
Vasco de Gama acted as a pirate in several occasions.
Magellan was so cruel and nasty to the population of the Philippines that they ended up eating him.
Probably the only sailor who never did act as a pirate was Columbus... but partially that is because he was almost a friar and would dress like one.

Wilson Kane has chosen, as his flag, the traditional Sicilian flag which is called Trinacria. That roughly means triangle. Unfortunately there aren't many website in English I could refer you to. It's true that the Trinacria is very similar to the flag of the Isle of Man.
It's a coincidence though, because there's no celtic origin for the Sicilian flag and, honestly, it would rather make more sense if the symbol were to be Norman (since both UK and Sicily were invaded by the Normans in about the same time period - 1061 to 1091 for Sicily and 1066 for the U.K.). But it's not. It's just a mystery.
Parlez!
I used this word because I hoped it would sound more familiar to the readers than the actual italian word: parlamentare. (it's a word that has the same root as the word Parliament :D)... in English gets translated with negotiation but it's not quite the same thing.
Parlez, just like parlare, means to talk and also shares the same root as Parliament and Parlamentare and it comes from ancient Greek: parabolé.
So Parlamento/Parliament actually means: get together and talk about stuff, establishing a dialogue and, eventually, find a way to negotiate too.
That's why when Martin asks for a parlez he is asking for a meeting where a truce would be reached and the two parts talk in peace. This sort of things were granted to ambassadors, they would ask for the right to talk too, right?
Usually il diritto di parlamento - the right to come in peace and talk to you - is never ever denied. In movies they usually show a dude with a white flag in his hand... approaching the enemies and delivering the message. It's something of that sort, the one who asks to talk is always putting himself in a vulnerable position, the one who accepts is superior and magnanimous and accepts to listen without harming the other. Fundamentally, as much as we seek wars... they are not always convenient and that's why, eventually, people talk their way out of them when everything gets unbearable.
Now to the final revelation: why do pirates' butt shine?
That's because they almost never see the sun so they are white.
(although Kane says his butt is tanned but probably what he means is that he has a dark skin).
I think this is what gave origins to the Italian saying: I am going to kick you where the sun never shines upon.
I hoped I explained everything this time too. If not, let me know.
Posted by dedasaur at 3:51 PM