Hello guys, I've started cleaning up today... so in the next two days you might not read anything in particular on the blog, since I'll be working on the update (which needs to go up soon).
Anyways... since I will be gone I wanted to post you another little insight about our locations.
Today I am going to talk about the doctor's quarters.
In this first image you see the part of the quarters allocated to sick bay use. The desk under the window I removed for lack of space and then put it in the doctor's bedroom instead.
But in short it goes like this: you enter and have about 6 beds in front of you (eventually our doctor will use them all at once and even run out of space). There's a table right in front of the door: he uses it to put his stuff on when he medicates people. To the right there's a opening, covered by a curtain, that gives access to his bedroom.
The bedroom is small and has shelves filled with jars containing medicinal herbs, his bed, a little desk and another small cabinet. 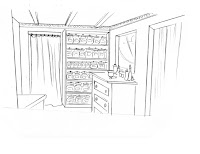 Some of the herbs and flowers, the ones he uses more often, are also on the outside (in sick bay). He mixes his medicines on that piece of furniture there, right under the window. The light streams through and the spot is pretty bright.
He has oils and other types of essences in the little bottles and he uses them to mix with the crashed herbs (turned into powder) to make ointments, pomades and things like that.

When he takes care of sick people he always lets them rest on the beds or lets them sit close to the table and mixes his medicines on the spot.
When he takes care of Cassandra, or the girls in general, he brings them to his personal quarters and uses his own bed, desk and the other cabinet close to a window - very similar to the one he has in sick bay - to do his stuff.
He does that because pirates don't knock on the door, they just come into the room with their hands to their tummy saying: ahi ahi, doctor, help!
Girls need privacy and need to feel safe from peeping toms.
The above image shows a view of the bedroom from Westley's bed.
Posted by dedasaur at 4:23 AM