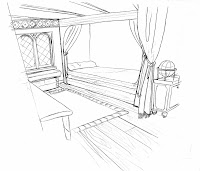 They are divided in two main areas... one is like a living room and then we have the actual bedroom. This second part of the cabin is separated by a red curtain (what's left of Pifo's raid to make his own clothes, of course).
I sometimes forget to draw the rug... so maybe Kane sent it to the cleaners or something. LOL

The living room area is kind of empty on the right side.
I think he is leaving it like that because he is expecting to buy another bookshelf for his books - expecting to increase the collection that is. He has a dining table that also works as desk.
Fickle lives on a tree branch next to the bookshelf. He is close to a window but does not get direct sunlight (which is not good for him). 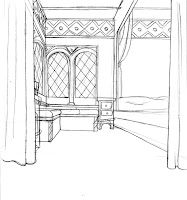 Also with time I added a nightstand because my guy is a reader and his candle has to sit somewhere. I got rid of the globe, instead, because they are not useful on ships.
You can see from the views that the bed is separated from the rest of the bedroom by other curtains (the very famous ones that will see Castalia change color when they close). You have to imagine that Kane might want to sleep in the dark and without the mask... beds used to close back in those days. Actually if you lived on land bed closed inside of wooden panels so, in a way, people were sleeping in giant boxes. I think that's because the whole concept of using curtains to shield the window was not there yet and also some houses did not have shutters.
It also helped keeping the environment warm in winter... so they would put foot warmer in the enclosed space, wait for it to get warm and then go to bed after removing the foot warmer (of course you might die if the thing stays in the box with you). A good movie who showed this particular type of bed is "The voyage of Captain Fracassa".

So... from the bed the room actually looks like this.
You see the windows (they lead to the porch - while the one to the right looks on the rear of the ship).
The barrel of water in the living room area is Kane's personal ration of water. He uses it for cleaning and drinking. He washes himself behind the curtains, in the bedroom area... where you can see he has a carafe and a basin that work as a toilet set.
The seats by the window are hollow inside, they open and hide books. This will be Castalia and Kane's favorite spot until she finds out about the secret window and chooses to spend more time in bed with hubby.
Honestly with a hubby like that... I would too.
Posted by dedasaur at 3:48 PM