timbermoonkiss, on Smackjeeves, was mentioning the fact that it would be interesting to see how it all comes together.
Since my working process is very odd for comics, I realized that some of the pictures I post as work-in-progress are not very explicative and could make one go: Huh? O_o
Here's the truth: I am no comic artist, I worked in animation as a storyboard, layout and concept artist and to me The Pirate Balthasar is a storyboard with balloons! (in fact my friends, who still work in the industry, always tease me about some odd choices I make and at times tell me: I didn't get why you did that until I got to that point and it all came together, but that's a movie trick!).
I am sorry about that too ^^" I am putting all my movie knowledge and scriptwriting experience in this and that's why, I confess, you'd see me freak out about direction of actions, POV, over the shoulders and never breaking the line. I think that using this kind of language can help a comic being clear and if the drawings aren't outstanding at least the story and all the motions are clear! ^^"
But here is: how I make a page...
(buckle up, it's a long post XD and I start from the very beginning)
My approach to making a page is the same I would use to create a film or an animation.

I start from a story which I write from beginning to the end.
The Pirate Balthasar was a novel I wrote when I was about 17 years old and that had some potential but it wasn't blooming in the hands of a 17 years old girl. After 20 years, all the experiences and my studies, made me think: I could fix this.
I highlighted in yellow the things that I liked and thought had potential and did a story spine, like I would do for a movie: set up, plot point one, act 2, plot point 2, climax and denuement.
Here's the silly thing... I created a presentation as if I had to pitch the story to someone.

In fact I did pitch it but National Television's answer was that pirates are not educational and they didn't accept the project. LOL
So I said: I'll do ad 2d in 2d... turn the whole thing into a comic and so be it.
And that's when I started writing free-flows for the character to see what personality comes out.
I work a lot on character development and have to create an arc for all of them: I give them moments of absolute shine and moments of weakness and humiliation... then I create a presentation for them. The ones you see me post at the end of each individual chapter are a short summary of what came out of about 40 pages of free-flows. ^^"
Using the story spine I start writing scenes. I start from the most important ones, the plot points and the ones that reveal huge stuff about the characters.

I focus on dialogues and write many versions of the same scene, until I find the one I like the best. Of course I know, then and there, that this is bound to change because what you write and what you actually end up seeing don't work the same way. Visual always implies something more needs to be added and if the scene does not flow you will only see it once you draw it and read it again.
On the other hand one always writes more than it needs to be seen and stuff gets cut out. 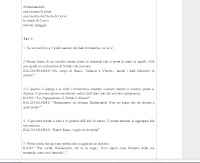 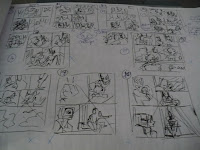 I did a complete script for the pilot but... eventually since I am writing and drawing, the script part did not help. I scrapped that step and went directly from the script with dialogues to the storyboards with dialogues.
Storyboarding, to me, is fundamental. (it was my job)
That's when you visualize everything, decide the camera movements, the shots, the angles, the directions, the locations, the light... I actually draw the backgrounds on a separate piece of paper and then compile BG and characters afterwards in photoshop. (not all the time but most of the times). When you see a lighter Background and if you see me repeat a Bakground... that's the separate scanned one. This is also animation thinking, I guess - plus makes the production process faster.
Storyboards are in thumbnails format. 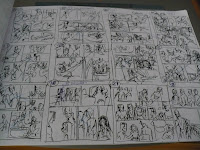 As you can see they are very sketchy (I don't understand my own writing but I understand my own doodles). In the top left storyboard you can see... I added Cassipea's reaction - it was missing, I didn't realize it when I wrote down the scene but when I drew the storyboard... I asked myself: where's Pea? Why isn't she saying anything?
So I went and called her: Pea, say something! XD
These are the storyboards to chapter 4, in my old sketchbook. 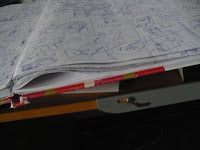 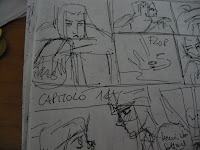 This is my second sketchbook... almost gone... with the next chapters.
As you can see [Capitolo 14 ] means I've reached chapter 14 (that's halfway to volume 4).
Because of this progression I could go back and fix problems in the previous chapters but, because I am only human, something might still have slipped - I don't doubt it. 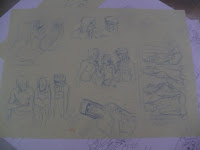 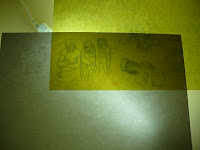 Next... what I draw in the storyboard tells me what I need to draw in a larger scale.
I use a blue pencil on yellow paper because it's a habit but also because... non-photo blue pencils could be scanned and disappear but most of all... oooh, they are the right color when you want to do clean up on a light table. There, you have it... I clean it up as if I were cleaning up an animation, on a bristol paper 220mg in weight with a 2B koh-i-noor pencil (a regular B for details). The cleaned up drawings are scanned and then brought in photoshop.
I leave it in pencil because I like the look of it. Even if they are cleaned up drawing (cleaned up already loose some of the freshness in the gesture) they are still more alive and soft than the ones done in ink. The more you refine a drawing the stiffer it gets ^^".

I cut and paste on a separate layer all the single images.
Move them around, resize them, then merge them in one layer. 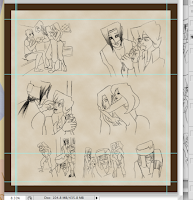 The images, at this point, are still in black/gray pencil color.
So I need to throw in an overlay because I am using purplish outlines and I like the way the purples look with browns... it make the sepia colors look richer, right?

The overlay is actually in stripes so the purple change! *ç*
It's applied only to the line drawing layer which is then set to multiply.

Once the lines are all purple it's time to set the panels.
I use the elliptic tool, set on rectangles, and draw squares or rectangle for the panels, I add a drop shadow (not black, it's purple too) and set them to multiply so you see the original background color. 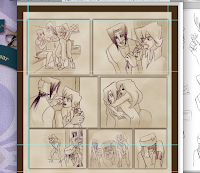 Then it's time to render... I select the panels and go to path then load the marquee so I can stay inside a specific area.
On a separate layer, set to multiply, I use the same color as the background paper to do the shadows.
I use a soft brush set to opacity 67% and even the flow is at around 70%... so every time I pass on the same spot it layers and it produces stripes.
The paper tone gives me the mid-tone.

Then I add the light... on a layer set at 83% of opacity so that the white is not completely white.
The fact that the white is transparent allows me to go on the same area where I already shaded too and mix the two tones - which kinda gives me a fourth tone to work with.

Color is flat and goes at the bottom layer. Its opacity is 43% so you have a watercolor/pastel look and they blend with the Bg and the light and shadows.

When all of this is done I flatten the file and save it as: lettering. 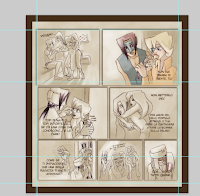 Adding the text is the next step. I do the Italian version first (and that's why, usually, is so full of mistakes LOL). The bubbles come in second. I draw them with the elliptic too and add the drop shadow, then add the SFX.
As you can see, while I letter, the script is open under the photoshop file.
This allows me to copy and paste the dialogues directly from the script, onto the page.

I have two final steps. I save the page as jpegs in a web format, so that it can fit the canvas provided by Smackjeeves.
I make pdf's with these files and send them for proof (Italian to Enju and English to Elianthos)... that's because I have been staring at these lines for months and at the pages for weeks... and I am human and mistakes do happen.
I then make a final pdf of both English and Italian version to be posted on Issuu, while I load the individual pages on smackjeeves using the menu.
The best part comes after that. Somebody still finds mistakes and points them out and that helps me a lot - especially if you consider that English is not my first language (nor is Elianthos'). So I open the files again, fix the mistakes and reload them on Smackjeeves... but for Issuu... I have to wait for the volume to be done so that I can remove the old versions and upload the full volume with all the problems fixed! ^^"
This is it. Sometimes you may think: if you see this as storyboard with balloons... how come you have vertical and horizontal long panels?
To tell you the truth those are pans or tilts! XD I imagine the camera going up or down as the eye would. I also use establishing shots and cut-aways.
I don't know if this is limiting or not, it's the only way I know!
Posted by dedasaur at 11:45 AM