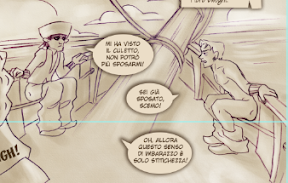 What makes an author happy is that something he/she writes sparks interesting conversations with great topics.
I am no author but I have to admit I was very happy to see people talk not just about recent development in the story - what just happened in chapter 5A finally throws some meat on the fire - but that some of the little things I added for fun were talked about with so much interest.
So... scurvy was an interesting topic and also a nice question about lemons and lime was brought up.
All of this happened on SmackJeeves so if any of you does not read Balthasar on that support lost some of the insight.
But I posted about scurvy and lemons... and yes, scurvy does affect gums and the dots show up mainly on legs and arms... but I am no doctor and Westley knows what he does... that is why in my answer I say: I'm assuming he thinks it's scurvy and that is why he gives her lemons. But he is the doctor, I am not.
Another important question was brought up and it was regarding... the poop joke.
So here's the crappy post for ya XD
How do sailors poop?
I had mentioned in an older post, the one that explained more or less how a ship works... that sailors/pirates would poop overboard. I guess reading it and actually seeing it happen is two different things.
Not all the ships have the ropes like the Alidivento but some of them did. You would tie yourself up or hold on to them because, especially in the Ocean, the ride is bumpy and sailing always has to do with strong winds (well, not always but mostly).
---one thing I don't do is... I don't put strong winds... it would be annoying to see the characters talk with their mouths full of hair... so as I decided to simplify the riggings... I have also decided to make sailing smoother and reduce the windy effect on deck).
It was rare to see ships with a designated spot for pooping and trust me the poop deck it's not called like that because they pooped there, it just comes from Latin puppis - in some ship though... poop would happen around poop deck.
So why is Wilson Kane is sending is men to the front and not to the back of the ship to do their thing? I mean, the front part of the ship is the windiest and if you pee against wind you pee on yourself, unless you turn your back and develop a special technique that implies... peeing in arcs!
That's pee engineering.
Kane sends his men in the front because 1) he does not have to deal with the smell 2) the front part cleans mostly by itself when bumping up and down on the waves 3) it's the narrower part of the keel and the poop falls directly in the water.
Trust me when I say these guys really lean out with their butts... and no, they don't wipe themselves off, why should they? They already bathe once a month and get rewarded for it profusely by the doctor, you'll see.
This is the poop solution.
For pee... let me tell you... guys climbing on the masts would not mind to just lean out a bit more and act like a cute little Cupid fountain from hiiiiigh above.
Does it reach the water? Nope. It's carried away in the wind and sometimes it drizzles where it shouldn't... but you know a deck is always wet (and what Pea does is not just cleaning it for fun!), this salty mist brought by the waves breaking against the keel and the wind always make everybody look... if not damp... well moist.
The dampness is another thing I don't draw and the noise also... just imagine them shouting all the time! XDDD They shout.
Doing stuff in a bucket is something that was granted to the girls... because they are girls, they need privacy, they might fall in the water and might end up being seen by the guys. They do it in the privacy of their room and then throw it overboard from the hatch.
Life at sea is tough. Girls on board complicate things more... when their period arrive the first time... ooooh the horror! Period is not contemplated in a guy world... it basically means a few things: the girl will bite your head off if she is on PMS, the girl is not available for sex... maybe... the girl is pregnant. This are the practical things to know in a guy's head and that's because they don't have this monthly unwanted clock that makes you feel grumpy, tired, in pain, dirty and smelly - not to mention bloated and very very tired. But girls do! It dominated their lives, cost them money and everything spins around it: can I swim? No, I got my period. Can I stand in the sun? Nope, I'll probably faint. Can I wear white? Yeah, right!
So what if we put the most feminine thing in the most unfeminine environment? Probably Hell breaks loose... luckily for the girls the doctor knew better and was nice about it (we'll know why, eventually, in chapter 6).
Btw the world spins around in two directions... Venus and Mars... right? So... guys have their problems too and just to be on equal grounds we'll pay respect to the problems they have with their little buddy, especially the morning salute.
Posted by dedasaur at 1:19 PM


The fact that they don't wash at all after doing it bothers me, frankly. I mean, not even a bucket of salty water for quick rinsing @_@?
Both solids and fluids remains drying up in those regions can get you very itchy and can even burn, it's a nightmare @_@. And during a whole month the layers of stink must pile up ... oh my XD *clings to the relatively clean&perfumed neat freak ship Doc even more*
And the miscellaneous composition of the deck mist... *shudders*
Bottom line: pirates are tough indeed XD.

if you think about it back in the 1700 hundreds they wouldn't even bathe nor wash their hands.
\In fact hygene got worse and worse with the passing of the centuries.

Marie Antoinette had scab on the palm of her hands... for all we know... all of her friends had it for sure!!!!

And if you think about it... Italy is the only Country with a bidet... the rest of the world waits for the evening shower or the morning shower to get rid of... the remains! XDDD

@Deda: lol, don't remind me.
I really wish the public&free thermal baths of the Romans, or the medieval Arabs hygienic customs would be widely in use nowadays sometimes in the western world :/.
You weren't a civilized city of the Empire without at least one big thermal bath structure, and you weren't a real citizen if you didn't attend it regularly *is currently in the despair at the summer stink of many contemporary people T_T* .


Btw... long live bidet <333.
Abroad I found it in some hotels, but I still remember almost crying with joy when I spotted one in a English house (not the one I resided in , unfortunately). The house cat had taken possess of it though XD. Maybe becasue the porcelain basin was to him a fresh cradle in the summer heat XD.