Okay, how about we talk about pirate movies today?
This is going to be a long post and that is because it took me many days to put it together... so you might want to read it in many days as well, muahahahar ahr ahr! ^_X/
If you click on the above title you'll get to visit the wikipedia page listing all the pirate movies ever made by year.
I never managed to see the ones from the early 1900... so the first one I'll talk about, on the list will be:
The Black Pirate - 1926
with Douglas Fairbanks.
I don't remember much of the movie, except I found it at Blockbuster, thought it was amusing... I remember making up dialogues for it and I really don't remember a girl being in it or doing much. What is stuck to my head is this image of Douglas Fairbanks climbing on the poop castle of the ship, much like Castalia and Cassandra do at the beginning of our story. It was a fantastic scene that left me pondering if they were using a Batman trick (that is, the façade of the castle was actually horizontal) or speeding up the film, or both, or neither and Douglas Fairbanks is a fantastic climber instead! And now you know why Castalia and Cassandra did climb on the poop castle!
Treasure Island in black and white - 1934
I love movies from the 30's! *_* This one was adventurous and honestly I didn't even hate Jim that much!
Captain Blood - 1935 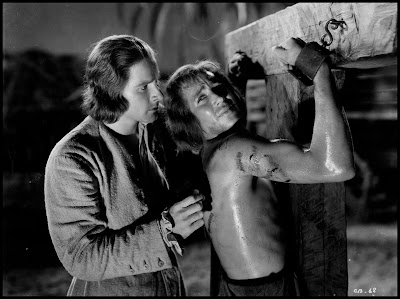 Aaah Peter Peter! *_* How elegant you are, how refined, with you hair nicely combed even when you sweat, are beaten or are taken into slavery! What is you secret, darling Peter!
My friends, you ought to watch Peter Blood in action with Arabella, against Levasseur (my poor, dear Basil Rathbone was always killed with a smile by most beautiful Errol Flynn) and judge for yourself if he is not the most romantic figure of pirate ever! A doctor and a captain, a friend and a fierce enemy, loved by women but in love with only one! MUAHAHAHA! Ideal....
The Sea Hawk - 1940
Is another wonderful Errol Flynn movie. Here we have Elizabethian pirates and Wolfingham acts as a bastard and a traitor. The love story is right at the beginning, then off our hero goes into adventure, to return to the darling of his heart - and gets married - at the end.
Fun fact: it took me years to watch the whole thing. It always shows up on national tv around 3pm and 30 minutes into the movies somebody would show up and tell me: we have to go to the dentist! =_=
The black Swan - 1942
Is a movie with Tyron Power... you know the one with "oooh Jamie boy". Girls get often mistreated here and I don't like when women get slapped for comical purpose, it's not funny.
We then reach the 50's with some more interesting movies. There's a Treasure Island by Disney, you know the one with Bobby Driscoll as Jim (he looks creepy for he looks like a miniature man).
The we return to Errol Flynn and Maureen O'hara with Against all Flags which is funny and adventurous but Flynn is starting to look old - she is a cutie though.
The Crimsom Pirate - 1952 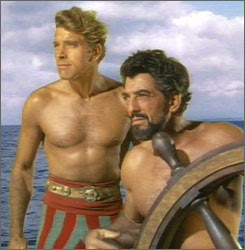 What I remember about this movie... with the most complex plot ever - it was so hard to follow I could spend hours thinking how odd Burt Lancaster's pants looked - was this guy like the Wizard of Oz (a professor) and Burt Lancaster half naked!
Actually some scene were very entertaining and if I am talking about this movie is because Burt Lancaster looks delicious... no... it's because his pants look so weird! Now honestly... they are either too short or look like Obelix's underpants!
Anyways there's action, adventure, some comedy, lot's of stunts and a love story and the main protagonist is naked most of the time! Sounds go to me.
In the 60's there's a bunch of random Adventures of Mary Read, Henry Morgan and the Pirates of Tortuga.... and it's all fuzzy and not so cool, till you get to the Disney movie: Blackbeard's Ghost. Okay, this is not a pirate movie, per say... but you have to admit that Peter Ustinov is fantastic! It's dated 1968.
The 70's open on a Pippi Longstocking movie - pretty funny if you ask me.
We finally get back to a Salgari cult: 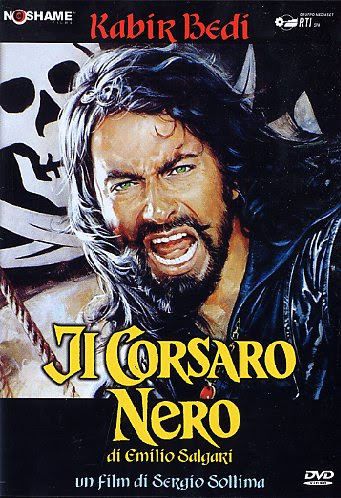 The Black Corsair 1976
Yes, it's Kabir Bedi, the guy who did Sandokan and looks all emo and sad with flowy black hair!
The story follows the book and ends with him crying, of course... poor, poor, Emilio.
Anyways... Kabir Bedi in black with flowy hair is something you want to see.
This Black Corsair is not to be mixed up with the Bud Spencer and Terence Hill movie, that's another one!

In fact it is from 1976 too... but it abused the Salgari title and the two famous actors to tell a serious story!
Nothing to do with Emilio, no no... here we have a Captain Blakie, instead, who wants to set free this lady he likes - although she is married - and kills her husband in a duel.
All I remember from this movie was: it wasn't funny and Bud Spencer dies... which turned the whole thing into a big "no no" to me!
Nobody kills Bud Spencer!
Now the 80's were slightly better, when it comes to pirates, as some of my favorite movies came out when I was a kid, lucky me!

Pirates of Penzance 1983
Kevin Kline as the King of Pirates is simply marvelous. Now I'll probably write a long blabber, one day, about this Opera.... and you might want to skip that altogether or decide to fangirl with me over some cool music and libretto.
It is a sort of Musical/Operetta... well it's a Savoy Opera. Let's face it: Gilbert and Sullivan were the Mel Brooks of Opera!
Now you know why I have a king of pirates called Gilbert Sullivan. This movie is hilarious, the story is hilarious, the songs are hilarious... in short!
This is what cracks me up the most recently and it's the kind of sense of humor I prefer and apply to my stories - except with no music, else you'd hate me. 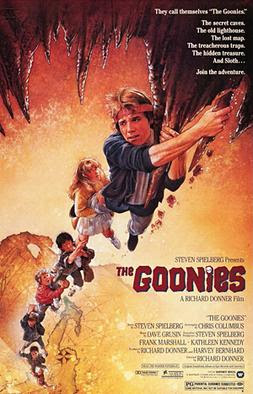 The Goonies 1986
I saw this at the movies when I was 13... and my love for pirates started burning up again.
I don't have to tell how incredibly awesome and funny this movie is. The story is compelling, the jokes are fantastic, the adventure is adventurous!
I had my sister look everywhere for a Uniqlo store in London so that I could get The Goonies t-shirt!
If you don't like the Goonies, you are no friend of mine.
Just kidding, I am not that drastic...
Then again... seriously, no, you have at least know the movie and then I'll grant you access to my heart.
Alright, you guys, we are definitely getting back to the good stuff. 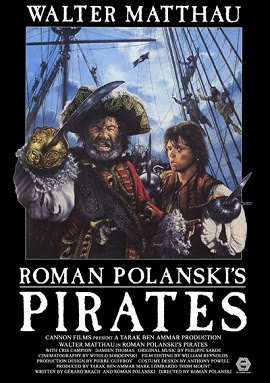 Pirates 1986 by Roman Polanski
This is the most pirateish pirate movie ever!
Pirates like you've never seen them before. Pirates for real!
Walter Matthau as Captain Red is the absolute, perfect compendium of piracy and picaresque spirit!
It has a great sense of humor, it has fantastic scenes and dialogues (I think the part where Red and the Froggy boy were sharing the rat was one of the funniest and most clever thing I have ever seen)
It has a bit of romance, but this is the tough reality so... you have to cope with it, love stories don't always end well when gold is the final prize. It can even get in the way!
An absolute must watch.
For some reasons Wikipedia does not list Princess Bride.

The Princess Bride 1987
I mentioned this title before, in the post about books.
Again, if the book was awesome you cannot imagine how incredibly nice the movie is.
And I am not just saying that Cary Elwes was, back in the days, a very nice sight to see (especially in the front view, not so much in 3/4 view XD)... but this is a story of love and revenge and so many other interesting things. Is this a kissing story? It is!
There's many good reasons to watch this movie, including Billy Crystal as Miracle Max and Peter Cook as the Clergyman. Did I mention the fact that the soundtrack is by Mark Knopfler?
Now, if it were for me I would totally skip the 90's... particularly Cutthroat Island and Hook... if it weren't for the fact that I MUST absolutely mention the Muppet movie.
One should never go without a good dose of Muppet in his/her life.
Did you know? The Muppet Treasure Island and Christmas Carol are most impossible to find in dvd in Italy? If any of you knows of available copies of these two movies, please let me know. I must show them to my sister's kids.
Oh it's 2000 and something already. Yeah, let's skip Treasure Planet and pretend that never happened... and go directly to Pirates of the Caribbean and stop at the first movie (2 and 3 is sci fi).
I've heard, from rumors, that On stranger tides answers to all my prayers... gets rid of Nilly Willy and Elizabeth the Silly and finally focuses on the only 2 cool characters in the story: Sparrow and Barbossa! Apparently we'll see Teach in this movie and Penelope Cruz as his daughter (please don't spoil Jack for me - plus I know people who was hoping for some Yaoi XDD Not me, I want him single!)
In the end, this was shorter than I thought. Probably there are not as many good pirates movies as I thought LOL.
Posted by dedasaur at 4:29 PM