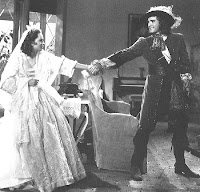 Westley Fynn
Our doctor is based off the first pirate I ever wrote about: Kyle Kemp (one of these days I'll look for my old drawings and we'll get a good laugh out of them together).
Kyle's looks and personality were transfered onto Wes when the original Kyle became something else - we might end up meeting him, eventually.
But who was Kyle based on? Why, of course, my all time favorite pirates: Captain Blood and Westley the Pirate Roberts!

And who is Peter Blood if not the incredibly charming Errol Flynn? Oooh, I loved the guy! I still do love the guy! He is such a rascal! I love rascals, they are the very image of romantic pirates!
...there you see... I thought: let's go back to the original inspiration and use the actual names of my beloved pirates.
I had already chosen Westley as a name for another character, I just gave it back to the rightful owner all I had to do is attach Errol Flynn's last name to it.
Westley Flynn! Your tongue stumbles upon the second "l" doesn't it?
So I had to drop it and now I have a Westley Fynn as supposed to a Westley Flynn - and I don't regret the choice since Disney has gone through the same thinking process and Tangled's hero is based off of Errol Flynn and is called Flynn something too!
Just remember: I chose Errol Flynn first!
CAT and FOXY
Are you familiar with Pinocchio? Because what I am actually saying is that these two guys were supposed to be like the Cat and the Fox in Pinocchio's book! Originally they were called Jesse and Nestor - but Jesse and Nestor moved to be somebody else's Cat and Fox... and when I had to pick a name for a new duo... I just said: Cat and Fox is fine!
I've always liked this song called The Cat and the Fox (Il gatto e la volpe) from Edoardo Bennato and Pinocchio is one of my favorite books ever. I think Cat and Foxy could sing that song and it would apply to them nicely.
I'll be more specific, because Cat and Fox actually do have names.
Topaz "Cat" Wodehouse
Is named after my favorite stone, a topaz and I decided his eye color should be golden for that.
And Wodehouse is my favorite writer. I mentioned him before, I think... I like his books because they are full of humor or maybe I am full of humor because I like his books. All I know is that I like to create the same types of situations in my stories and when I found him I felt I had found a companion, a best friend.
Sally "Foxy" Twain
Now, Sally is a girl's name. I will not tell more about this except it comes from Dr. Sally (a Wodehouse book) and series of fortunate coincidences that saw me like different cartoon characters called Sally (starting from Nightmare Before Christmas). Of course I don't need to mention who Mark Twain is. All I can say that a man who can write a Diary of Adam and Eve like that deserved more from life and is my other best friend when it comes to telling funny stories. Unlike Wodehouse he adds dramatic events to his funny episodes. I like that mixture too and I humbly wish to follow that style too.
I am no Wodehouse nor Twain, of course... but can I just dream a little and try and follow their footsteps?
Posted by dedasaur at 7:30 PM