I have been asked if I could suggest any good books about pirates! - aside from history books and non fictional book, of course.
Wikipedia lists these - but for some reason it lists The Count of Montecristo as a pirate book (which is not, although it is one of the coolest adventures ever written, my co-author, Giorgia, agrees with me that Edmond Dantes... is absolutely to be jumped on)! 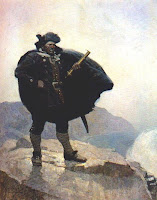 Well, it might surprise you that I don't have that many novels about pirates in my bookshelf on anobii, that is because I borrowed most part of the things I've read when I lived in San Francisco from the very wonderful San Francisco Public Library (included the now difficult to find "Piracy was business"). Plus I read mostly history books.


<--- Long John Silver, by N.C. Wyeth (this is exactly how I've always imagined this fella).

Let's start with a classic: 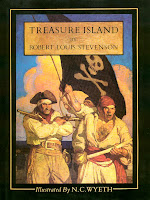 If I could recommend a version it would be the one illustrated by the amazing N.C. Wyeth.
We all know the story about a boy hunting for a treasure and being tricked by the evil Long John Silver...
Evil?
Oooh, come on, who doesn't love Long John Silver!
I do, I do, hurray for Barbecue!
Enough with the silly stuff. Treasure Island is a great classic, never gets old and is pretty adventurous, plus the relationship amongst characters is amazing!

It says here the book is no longer under copyright... that means that you can be a total pirate about it and read it for free here. (God, do I love the project Gutenberg's website it lists something like 3211 pages of books on pirates).
Now, you may know that Peter Blood is like my favorite pirate, lol. I think I mentioned this before.
This is a story of a poor British doctor who's unjustly accused of being a traitor and sent to work as a slave in the colonies' plantations. Once there, Peter is recognized as a talented doctor and is left free to roam around the city of Puerto Royal, for a series of fortunate events (I don't want to spoil this to you) he manages to escape and become a pirate, not without leaving a little bit of his heart behind - for he manages to fall in love with Arabella in the meantime, great gal by the way! - but never leaving behind his sense of justice. A must.

Raphael Sabatini also wrote plenty of other books about pirates. He is a cool author with very compelling stories and characters you can sympathize with. Of course he is very traditional and some things might feel old/odd as the sense of justice was - a few years ago - pretty much different from what we have today.
and: 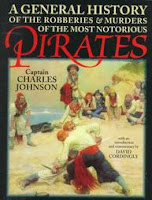 Yes, it's an essay but a very loose one. How do I say this: this man also wrote The King of Pirates and other stories about piracy and he was very fond of Captain Avery, you might want to check his books out to figure out what I keep saying: the pirates of the Caribbean was a short, yet noisy, phase of piracy made famous by Disney and others... most of THE COOL STUFF happened before or after that. I go on and suggest everything by the author here because this man wrote a lot and there are controversies about the fact he did indeed write this or that. Plus, and language is always a plus, his writing is absolutely stunning.

For the same reason it is fun to read The Pirate book by Howard Pyle (the author of the illustrations on the top left cover - I think he is the inventor of Hook's look as Disney was mostly inspired by his red pirates). You need information to understand a phenomenon like piracy and be able to put in a context the novels you read.

This is not set on the sea and they made a movie out of it - the movie is partially better for it skip some of the useless part and had better ellipses in the story, still Fezzik's story is better in the book.
This is a story of True Love between Westley and Buttercup and how he gets killed by pirates and she ends up engaged to an ugly Prince... until she is kidnapped by Vizzini and his men and rescued by the Dread Pirate Roberts, a masked pirate wearing black, very cultured and very good at sword-fighting. Yup, Westley is Deda's n.2 in her beloved pirate list!
I always recommend this for the sheer brilliancy of the author's sense of humor!

The Black Corsair (Il Corsaro Nero) by the wonderful EMILIO SALGARI (who wrote like a gazillion of stories without ever leaving home and made them feel so real!)

Ah-ha... you thought I was not going to mention my beloved Black Corsair? Hell, no.
You are lucky pirates only show up here and there in Verne's books The Mysterious Island especially - they do show up in Tom Sawyer as well, did you know? (only Wodehouse, I think, left me pirateless).
Well, you better imagine Emilio with Kabir Bedi's face too, while you read this! LOL
This is a story of revenge and passion that meet, in the end, tearing our protagonist's heart into pieces and forcing him to choose one over the other. How romantic!
Halfway to the book Salgari writes his take on piracy, which is really really cute, plus... you gotta love this guy for naming the cool protagonists after himself all the time. Emilio di Ventimiglia is the Black Corsair (if you were to read the Italian Robinsons the cool guy is named Emilio too! XD)
This book has 2 sequels: The Queen of the Caribbean, Yolanda, Daughter of The Black Corsair. Revenge takes very long. There is also The Son of the Red Corsair - now this one meets Pirates of the Caribbean and is a separate story from the previous ones.
Emilio Salgari also wrote other saga about pirates:

The Pirates of Bermuda Series

See one of Baldassarre's ship is called Thundering - La tuonante! XD Isn't that a cool name for a pirate ship?


This is if you want to read all of Salgari's book. I find him very entertaining, easy to understand and absolutely love him for his naivete. I am getting all of his books.

Long John Silver: the True and Eventful History of My Life of Liberty and Adventure As a Gentleman of Fortune and Enemy to Mankind by Bjorn Larson

This one was an interesting read. I am not too fond of fan-fictions especially when they turn the characters around to satisfy their fancies or help the plot. I have to confess that Larson did a nice job keeping Silver the way it was, just as Stevenson had imagined him. The first part of the book is very nice and interesting... I have to confess that the second part reminded me a lot of Captain's Blood slavery episode and the meeting with Defoe doesn't help speeding up the process of reading because he repeats what you have read in the Defoe's books with his own words. In the end the story is told in first person, it's a memoir, and Silver keeps on addressing different people in his storytelling, ending up writing directly to Jim. That might stress the reader a bit but you have to understand he is an old man and he is trying to put down on papers his memories. The ending is just glorious.
Except for the Defoe part, it's a very fast read and it's not too descriptive nor annoying about silly details.

Of course we have pirates in Peter Pan but I would not consider that a pirate book especially since the Pan is a pirate killer! (è_é)--> shame on you, Pan!

The Gold Bug by Edgar Alla Poe
is a short novel which I think inspired the Goonies.
It's the story of a treasure hunt and cryptograms. Pretty cool too as insanity of the protagonist is implied all the time.
The Corsair by Lord Byron
Yup, the Corsair himself wrote a poem about a man fighting against society's standards.
I don't know if you are into poems but Conrad is a true romantic hero. Many musicians were inspired by this poem included Verdi and Berlioz.

I am currently looking for The Pirate by Walter Scott. If I managed to read it and find it I'll let you know what I think about it.

Last but not least I think I ought to honor the very queen of Romance Novel: Georgette Heyer.

Oooh, we are talking Elizabethian pirates here! The ones who invented stuff and made ship-building advance and turned heavy and ugly ship into oceanic vessels.
Now, this is considered an Historical novel, rather than a romance novel, I have to say that Georgette Heyer's writing is a bit bulky for my taste - and I wonder if she was paid by words, still Dumas was paid by words and never used useless ones - so I haven't quite digested the book but its setting is very very interesting. Plus Nicholas does something very similar to Peter Blood: he is very chivalrous - to death - and would risk his life for the girl he loves.
So why do I suggest it? Because maybe you don't mind bulky writing - used to Harry Potter and Twilight (I consider those bulky too) - maybe you find her writing easier to digest, more than I do. And the book is pretty nice, not to mention that she does write nice comedy when she wants to (Devil's cub was really funny and it's about a kidnapping gone wrong).

I'll probably write about movies next, if you are interested.
Posted by dedasaur at 10:19 AM