this is kind of silly, I know, but if you are on facebook and play with Pet Society you might find this little guy running around (well now he wears a wig and a mask, like he should).
Before I even started planning the comic, since I had Balthasar in my head for such a long time, I already had my little Wilson Kane running around doing pirates stuff the pirate way. 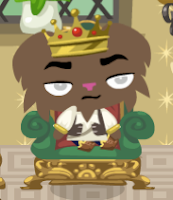 And he deemed himself a pirate King, as you can see...
With time found a crew made of his friends and organized trips on his ship... and eventually met a wife and got married and had a child, named Castalia.
So probably this is not the right Wilson Kane... but the previous Pirate Balthasar... who knows? XDDD

Sorry for the silly post, I'll be traveling today and I still wanted to say hello. I know there's people out there playing this game... I don't play very much anymore, after the pirate theme was gone, but if you want to see a pet version of Wilson Kane you'll have to look for him on Facebook. Castalia is easier to find... she is Deda Bau's pet (the account you see to the side)... she is somewhat of a witch though, don't be scared by her lab!
Posted by dedasaur at 9:29 AM