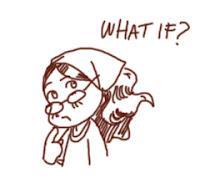 Stories usually come from simple ideas, from a simple question that goes like this: "What if....?"

- What if everybody in the World decides to stomp the foot on the ground at the same time?

- What if sharks learned how to fly and started flying around cities?

- What if zombies decided to turn a leaf, became vegetarians and that improved their intelligence to the point they became politicians and stuff?


So before you even think of a character and a story there are a few things you want to think about: thesis, theme and what ifs.

Let's talk about What ifs now.

Storytelling starts from observation and understanding. Life is a story in itself and it is very very interesting, you just have to stop and listen to it.
You have to be: aware of your surroundings, curious and you have to question stuff all the time. Be observant and detached.

A lot of people will tell you that injecting yourselves and your personal experience in your story is wrong, that you shouldn't do that. That depends on how you do it.
This is something I've heard only in recent times because back in the days, if you were to take a creative writing class, the first thing they taught you was: write about the things you know.


So I have a feeling that these DONTS are just noobs' trend that sprouted around the internet, more of an opinion rather than a fact. I often read and giggle about sentences like: this is good idea and this is a bad idea... coming from people with no authority in the fields. So be careful who you ask your opinion to.

There are no such things as good or bad ideas. Ideas are ideas. It's how you develop them that makes them good or bad.


You cannot talk about yourselves turning your character into a "heroic you without defects" and letting him win all the time... that is wishful thinking. If you think that in that situation you would kick ass, you are not being honest about it and clearly you have never been in that situation.


I remember Osamu Tezuka talking about this point in one of the chapter of Boku no Songoku. He was making fan of his character, Sanzou, for always acting like a coward saying: what a whiner. Then the character turned against him, drop him in the comic, forced him to take his place and, as it turned out, Osamu Tezuka was even more of a coward than Sanzou and ended up apologizing to him. 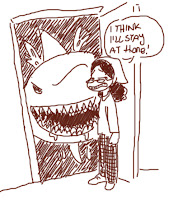 You have to know yourselves and be honest about it, your faults are far more interesting than your talents. Maybe those are the things you want to inject in your stories.

Quite frankly I think that people always have interesting things to say, and so even when they talk about themselves, their ordinary, everyday, normal little selves... masterpieces are born: Blankets, Portugal, Mom's Cancer, Mauss... LMDV. I could go on for ever. They are gorgeous!

Your what ifs are always born from the things you observe and how your curiosity reacts to them. If you are standing in a white room and you think it's a boring room a what if about color might kick in: what if walls that change colors according to people's mood were invented? What kind of complications might that arise?

They also sprout from your fears. The flying shark idea... that's where it comes from: I am might afraid of sharks. If they were to fly... leaving the house would become quite troublesome... or funny.

So go in the World, observe, ask yourselves question and put down a list of what ifs... you can use more than one in your story. You can use one per character and you can even solve a what if and move onto a second one (that works if you have a serialization going).

But do start from simple questions and write them all down. Ideas are ideas, cannot be copyrighted and a lot of people think about the same ideas simply because we are groomed and molded in the same society.

It's how you develop your ideas that will make you different from others. This is when theme and thesis kick in. I'll talk about them in the next posts.

I like this kind of posts. Storytelling is a fascinanting subject and I'm always interested in what people who I think are good at it have to say on the matter.