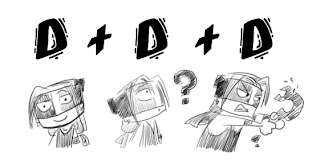 What's a story?
A Story is something with a Beginning, a Middle and an End. As simple as that.
Your story has to start, go somewhere and then find its way towards the ending. It might seem logic but try and ask this very same question to anybody you know and almost nobody will come up with this answer.
Because it's simple, it's straightforward and it's a bit obvious.

But clearly that is also what a story need: it needs to be simple, linear and obvious.... but don't take this words literally.

Simple is best, linear means you need structure and obvious simply means that everything must be clear enough for everybody to understand, without a reasonable doubt, without interpretations of sort, without way outs.

What are the main elements you need in a story?
You need a character, his environment, you need his dream, a conflict and rising action and then a resolution and then...

No, let me summarize this better. A story needs these elements: D + D + D.

Or to say it better: a Dude with a Dilemma and how he Deals with it.

A Dude is a Character.
The Dilemma is a Conflict.
And how he Deals with it is all the series of Rising Complications that would lead him to the Final Resolution.

A story can be moved by two things: plot and character.
Plot drive stories can be quite tricky and may lead inexperienced writers to character betrayal.
Character driven stories, if not dealt with properly, can lie flat and never go anywhere.

Plot is the series of events that move the story forwards, carrying the character along for a crazy ride.
It needs a good amount of cause and effects.

There can be stories with very little plot but there can never be a story without characters.

It is one of the reason why a character driven story is to be preferred to the plot driven one. You can have a cool plot and mess up the character, then nobody will believe you... but you can have a cool character keeping together chaotic elements and people will follow you in the ride (let's not forget that most movies have very simple, linear plots and are held together by the charisma of the protagonist).

Know your character and you shall also know your story.

I'm looking forward to any future posts on story creation, since I'm in the process of writing my own.

You are absolutely correct on the know your character part of things. I've been writing out character sheets for my story and some of the results kind of surprise me. I feel my previous attempts at writing were not as successful due to incomplete character creation and flaws. It's too easy to create static, flawless, characters that no one can really relate to.