This week is a bit frustrating having to write the curiosities. I watched some of the recent TV-shows, that just aired, and found them to be completely flat, simple and rather boring. No brainer, really!
At one point, one realizes, also from comments here and there, that smart writers have it easier than intelligent writers. People will nit-pick at the smallest, most insignificant details and completely loose track of the big picture anyway, so why put a big picture to begin with?
Relying on this lack of memory allows such shows to go on for ever and ever without anybody realizing that the same character is doing one thing in episode 8 and its opposite in episode 12.
Why bother constructing?
Anyways I don't give up because I write essentially for myself and I write because I don't find gratification as a consumer. Nobody has created something fit for my brains or suitable for my emotions in quite a while, therefore I must compensate by drawing and writing the stuff I have always wanted to see.

Ah! Yes. Back to the curiosities.
Callista went to see the doctor because it's the day after and whether she is not feeling alright or she just want to make sure everything went right we must not forget one thing: this ship is under strict doctatorship! Anyways she follows Wes' order of: nobody suffers in silence.
As simple as that.
She is a smart girl and explained what happened. Hence the doctor's surprised reaction: ah! 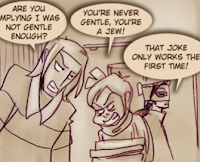 The joke is old... and she also said it wrong... at the risk of sounding anti-Semite.
Clearly what is the word she was supposed to use? Gentile, precisely.
Funny enough the reaction from Kane and Wes is not on her mistake anymore (it's like they are getting to used to her) but on the joke itself.

Dried figs are supersweet. Like... honey coated dried fruits.
In a way they are saying that the scene is too sweet, diabetes anyone? Duh! But also dried figs have been a well known snack since ancient times. In fact they were sold as snacks in amphitheaters during Greek plays or in Rome during the games in the Coliseums and other Circuses. 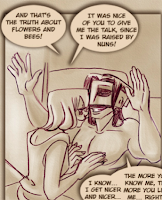 Why not the usual phrase: the birds and the bees?
Aside from the fact that the sentence as we know it came to be pretty late, and due to a famous pamphlet, this scene is building towards a silly misunderstanding that will culminate in the next release... hence I will not anticipate too much.
I can only tell you that Kane is to be taken literally: he is talking about flowers and bees.

If he says so it must be true.
Not even his brother, not even his father or his mother... surely this has nothing to do with the literal "full name going in the same sentence with the word love".
This is about actually hearing somebody professing affection openly and with sincere heart to you.
This is Kane being touched and moved. That's the true realization.
Posted by dedasaur at 1:11 PM

I love dried figs! They are delicious *,*

So, I was right. D: About that 'no one has told him' thing. ._. Wow. I know that people, even in family, did not throw those words around so much at that time, or even think about it much, but still. D:

"At one point, one realizes, also from comments here and there, that smart writers have it easier than intelligent writers. People will nit-pick at the smallest, most insignificant details and completely loose track of the big picture anyway, so why put a big picture to begin with?"

Because there are people who don't comment but do get the big picture and because some authors like being intelligent writers and there's beauty in being proud of what one does.

it was more of a rhetorical question... like "why bother constructing".
What you say it's true.

But they still don't do it. Hence stuff like Terra Nova is born.

OMG I'm so slow. NOW I get the Jew jokes... jeez. I really should be amongst the first to pick up on that. ^^UU
You are very, very clever.