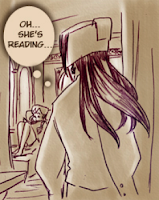 Quite the silly curiosities today.
Castalia is reading without glasses? Remember, she uses a reading stone. The drawing is quite small but she is holding something on the page, in fact we only see one hand holding the book and the other one is not holding the page on top but it's inside the book instead.
To see how she holds the stone you would have to go back to the scene where she overhears Kes and Wes talking.
In the next panel the hand holding onto the book is not stretched but curved. That's because the stone is between her hand and a book cover.
So she is reading a book about herbs, then wants to switch to Shakespeare. As I previously stated, Kane has some of the bad quartos and probably many more pirated versions of Shakespeare's books.

Remember how previously Castalia had surpassed Fickle in the list of Kane's favorite things? This is when she surpasses books.
In the course of our lives we always underestimate how important the network of love and affection around us impact on our decisions and on so many other things.
People who have nothing and no one ends up living an existence that makes them invisible at the eyes of others and sometimes they lose their minds too.
This man has 2 brothers, 3 friends, a crew of twenty and nothing more. It's a very small network that he tries to enlarge and keep dearly close to him. Even so, being a guy, he thinks they respect him and are loyal to him... mostly. This kitty here loves him and she told him so.
There are times, in the life of a man, where everything comes down crumbling like a castle made of cards... sometimes in a bad way, other times it's a very good thing. This is the case.
This is a more important gesture than it looks like. 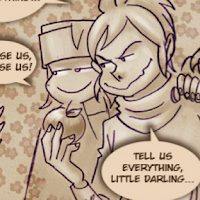 Oh yeah, you got the reference, it's not the first time I use it... I am a sucker for Snowhite! XDDD
There is something primordial about the scene where the witch tempts Snowhite with a red juicy apple and she takes it... Eve made the same mistake and look where we are now, LOL.
Apples are symbol of temptation and corruption... maybe.
Beware of apples! They look innocent but they are evil! Muahr ahr ahr!
Pea is a bit funny in this portion of chapter but she never lacked a sense of humor, even though she is a proper lady. Let's not forget the "everybody vs. the doctor" card game and also that she played the part of the little devil when teasing Westley with Calli as the little angel.
The "good boy, good boy" bit we saw in the aunties... was something she used to do with Cassandra (poor Foxy always the victim). In short she is part of the devilish duo so a bit of mischief is to be expected from her.
Now here the gossip concerns Kane so she is very curious about it. Let's not forget she already stated she doesn't like blond men and if he were to act like a Duke, instead of a pirate, she would probably crash land on him. But he is a pirate and that's enough to make her say - twice already - "what a waste" and keep her with her feet on the ground, attached to reality. Nevertheless she is still curious. 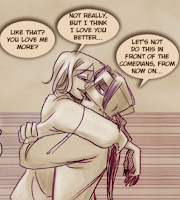 Okay, while Lio and Calli perform a reprise of the little comical bit we saw in chapter 8... Kane states and extremely Italian concept.
A lot of proverbs and sayings, in Italian, are related to theatrical performances of sort: street performance, marionettes, commedia dell'arte and so forth.
We use these sentences, particularly in Sicilian, to refer to several actions like: unpack (to close the show and collect the marionettes), be noisy and feisty (performing the opera dei pupi) to the most typical don't open a show by yourself, don't be theatrical and so on.
There are two possible explanations as to why one should never perform in front of the comedians (in this case a company of actors, and when referring to Calli and Lio Kane always thinks of them as a company of actors not a comical duo or comediennes in the modern acception of the term.)... can you think of any?
Posted by dedasaur at 3:29 AM