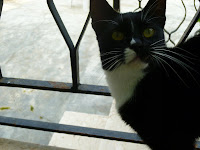 As you can see here is Wilson Kane Cat after snatching a huge chunk of eggplant parmiggiana (top left corner) from our kitchen... and he ate it all!
Yes, apparently cats in Sicily eat eggplants!
And he doesn't look guilty at all, he looked at me and went "maoooaoooooo"!
That's where I raise my hands, surrender and think: what can you reply to a maoooaoooo said with such a grouchy voice?
This ought to be the stupidest post ever but this little thing had me laughing for a day!
Posted by dedasaur at 8:04 AM