Sorry it took me very long. I was supposed to post them yesterday but they fumigated my area in the morning - to my surprise as there were no sign nor email sent regarding this thing (in fact I had to redo my laundry because it was too late when I realized the smoke had smoked all my clothes already) - so I was forced to stay indoor and could not come downstairs to check my internet and post the curiosities.
So here we go today. 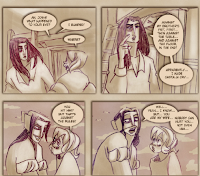 More than a curiosities this is a clarification (I hate it when people fight over things in the comment area, people can have opposite opinion and still share the love for the same things, I believe).
What happens here? This is a very traditional technique used in old comics that was taken from movies, it's called: Cut away.
In short when you flip a page there are two possibilities: either the scene continues from the previous one or you jump in time and location.
When the second thing occur you cannot go back to the subject of the original scene so you cut to something else that could take place at the same time as what we don't scene happening on scene.
I can't remember what famous director said that: a story happens between cuts and life happens during the ellipses. :D
So what happened here, in the end is that Kane took Castalia away from the treasure room and I decided not to show it. I've decided, instead, to use the sky (a visual symbol) to show the outdoor without specifying where the outdoor was.
It's not the first time I leave you to your own induction. It's because I simply cannot stand the spoon feeding going on in contemporary storytelling: it's completely unnecessary and readers are not stupid.
Also I am all for action-reaction. I might show you the event first and the outcome later. Putting them together flattens storytelling out, it's like giving the solution before the problem starts. 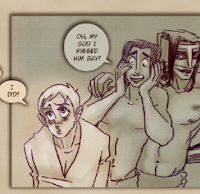 Pifo asked for something and the doctor wants to be assured that Kane agrees.
Apparently not only Kane agrees but gives Pifo instructions (after getting rid of his brother, whose queer is of no use to Pifo's problem).
Which leads us back to the first scene where the doctor gives Pifo what he asked for... and what he asked for needed Kane's permission.
This page has a haiku structure. :D
As for what the doctor gave him.... my guess would be anything based on olive oil. When you read about ancient history there is always something about sex and olive oil (not to mention some types of infused olive oil where considered aphrodisiacs).
Lubricants are as old as time for Greek Love, even though it might not have been officially accepted in some ancient societies - like the Romans - (and in some occasion persecuted - but especially in cases when the behavior was not considered appropriate)... it was, in facts, just strictly regulated but part of the culture and everyday life. Most of the times overlooked. Many many times it was the main topic to excellent writing too (see Catullus).

Why leaves and not pages?
Because a leaf has two faces and those faces are called pages.
So what Kane is trying to say is that not only we have many pages in our books... we have many leaves: there is double face to a leaf.
Like a medal has two faces. In short he is telling her that the same emotion and the same thought can have 2 faces and these to faces could be contradictory. Kane believes in opposites coexisting.
And this is it for this week, sorry to keep you waiting.
I would like to thank the people who already send me their Pirate Trinkets for the Pirate Day celebration! :D Moaaar moaaar!
Posted by dedasaur at 4:33 AM

I'm interested in what the Doctor gave Pifo... In those times, correct me if I'm mistaken, there was no lube... 8D
I'm just curious, and I bet I'm not the only one ;D

But Deda, you already explained those things in comments, and I don't think we fought about the cut time thing. xD I was just curious. o3o;
And as for leaves, I do think it must be faulted on fact English is not my native language, two-side thing made it all clear.
But thank you for the curiosities anyways. C:

True, Farstar, but only half of my readers follow Smack Jeeves so the other half never saw the comments.
The same questions arise on different websites :D.

Also... the reason I keep the curiosities is to avoid explaining things in the comments - but this week there was another quarrel on SJ and I was forced to keep an eye on it.

Truth is: it's my fault for not being efficient. When I say I should not put explanations under the comments I should stick to my resolutions.

Because I really do have little time and last week I had so little time I never sat the whole week.

So posting the pages, collecting the questions and post the answers in the curiosities would be ideal.

Joanna I have no idea what the doctor gave him... but lubes existed since ancient times (homosexuality was not so condemned before Christianity showed up)my guess is it was only called different, probably it's just olive oil. Let me post this in the curiosities themselves.

Oh right, I keep forgetting that. xD
But do you also post Curiosities in Italian? I haven't noticed lately. xD; But part of your readers are reading only that language, I am gathering?
But I think you're very efficient. No other comic artist I know does daily updates, keeps a blog this active, and posts all these neat, historical thingies and also spoil us with additional arts, plus, keep in more familiar touch with the readers, such as answering comments, here or on comic occasionally. Thank you very much for all your hard work. It must be quite hard often, or at least, from time to time.

I hope I can keep on doing that... it depends on how much time I have (I am not so active lately, especially on the "illustrations" point of view.

Hmmm i'm not sure the "leaf" thing works in English... it's what you call it in spanish so i assume it's the same in italian... but you don't really call it a leaf in english i don't think 0.o

it's called leaf in English too.
That's why they have the saying: turn a new leaf. :D