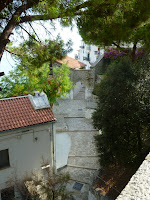 Taking advantage of the fact I have friends traveling with me I take them to my favorite places too.
This is Sperlonga. I use it quite often for my backgrounds so I thought: Mh, I never posted about the actual places I use for inspiration, I should take advantage of this trip to also take pictures of the things I keep using in the comic.
For example, this arch-entry to the town at the end of a steep is the one that inspired the first kiss scene in chapter one. I use part of it in the background elements. 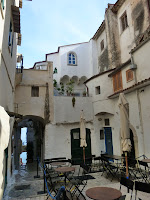 This part of the architecture, instead, I ended up using for some of the shot during the whole kidnapping scenes.
I do like narrow passages and tiled roofs. 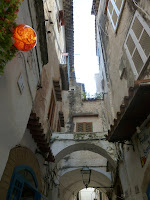 I like to use these small arches, used for keeping the weight of the walls from making building collapse on each other... especially when there's many of them and they create interesting negative spaces. 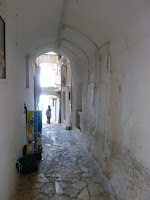 I like tunnels but I haven't used this one yet, as I was keeping it for the island of Baronett, which is the island where we're about to land and meet Martin again. 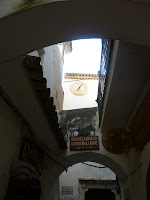 Arches as foreground element also make the shot very interesting.
This is actually a small courtyard with a small well, element that I haven't used yet but that will be used soon.
Anyways this was a town that used to get attacked by pirates, so they had developed as a form of defense narrow passages, tall building and intricate net of small roads and staircases. In case of an attack it would slow down the attacker and allow them to throw hot water on them.
Also it would keep the house warm in winter, sheltered by the winter winds.
Posted by dedasaur at 8:14 PM

This is incredibly interesting, especially seeing how architecture works as a function in peoples lives. Sadly alot of that is lost in spg. Isolde