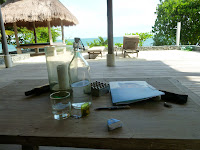 I have a few things to share with you... including some nice fan arts that were sent to me while I was away.

But first I wanted to share some pics from my 3 days vacation with you... to show you that, even though I go on vacation, The Pirate Balthasar never takes a break. 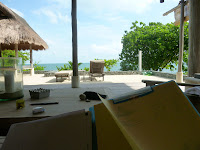 This is Nikoi island, a little patch of Heaven off the coast of Bintan (Indonesia)... not too far from Aceh (pirates anyone? Yes, there used to be... but apparently after the tsunami things in Aceh have calmed down quite a lot - some times good things come out of very bad bad things, sigh).

I went there for three days to just unplug before the semester started again (I had not taken days off for a year) and, of course, I brought drawing materials along. 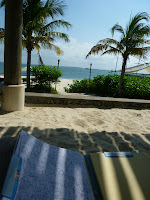 One side of the island is mostly windy but I could sit almost anywhere and draw without being disturbed... but I would have a small crowd of people stand behind me, peeking over my shoulders going "oooh" every three minutes.

LOL I am telling you, the way I draw doesn't make sense until the last 30 seconds of the drawing, all you see in the first 2 minutes are shapes and scribbles... then the eyes appear and the facial expression does the rest hahahaha. 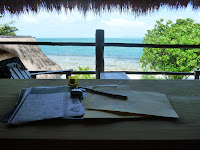 Ah, don't rely too much on what you see in the black and white storyboard, some of the pages where crossed out because I could achieve just as much with less dialogues and pages. So the storyboard have been edited quite a lot.

Anyway the fresh air, the view from my room (which was, in fact, a 2 floors hut) were good and inspirational. I got a few ideas from this experience since the crew is going to land on an eco-friendly island themselves quite soon. 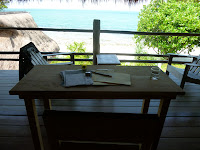 I am planning for Pifo to do something brilliant and now I feel like going to re-read Robinson Crusoe (although The Italian Robinsons by Salgari would make more sense since they got stranded somewhere in Indonesia too, sooo.... same vegetation).

I did some pillaging and plundering (came back with a bag full of sand and dead corals - I don't pick shells unless they are broken, otherwise the hermit crabs would be left homeless - I sailed the pirate way, shouted over the wind the pirate way, drank (a lot of water, which is apparently very precious and hard to find :D) the pirate way... but the thing I did the best, the pirate way, was... CHILL!

I took a chill pill and enjoyed life because I have life and being able to rest and relax is, nowadays, a form of luxury!
Posted by dedasaur at 2:18 AM

Is that an astroboy I spy on the folder? :P

Oh yes,
I've been a huge Astroboy fan for maaany many years! Way before they made the movie :D I love Osamu Tezuka, in general.