Apparently Cassandra has sensitive ears... and also has a soft spot for Wes' voice. So imagine how she likes to hear her full name pronounced with that funny accent of his (that in shallalah's language is considered to be sexy)... whispered in her hear.
It's like the hyenas in The Lion King... ooooh, say it again! Mufasa! 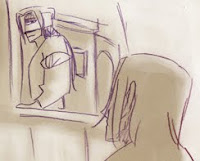 Discipline on board... it's the quartermaster's duty.
Cat should take care of the situation and divide Wes and Foxy... fighting over a woman.
But Wes is also the First Mate and can be disciplined by Kane alone. We know though that Wes can override Kane's order if he thinks they might put everybody's health at risk.

It's complicated. Hence there's a moment of silence during which Wes realizes he picked a fight instead of using his higher status.

Can you guess what movie am I referring to for the creation of this scene? It's one of my favorite animated film and caffeine has a certain effect on the protagonist. My favorite scene ever! In our case potatoes trigger a very strong reaction in poor Josh and he totally flips. 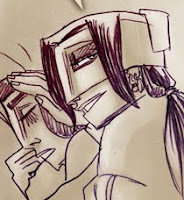 And so what's wrong with Josh? Kane tries to explain in his own words what his brother's condition is. He cannot even figure out if it's an illness or not he simply thinks his brother is strange.

Still he was able to figure out loopholes in his brother weirdness and he managed to "program" him... or train him - as he states - in order to make him self sufficient and safe.

He spent his whole life doing so... which brings us back to Callimaco's conversation with Pea, when he states that Josh can be pretty dangerous if not handled in a certain way and that Kane knew how to while he was so presumptuous to know he could have done the same not considering the outcome of his reckless choice (resulting in the accident that made him limp).

We haven't seen anything yet.

Callista is another underestimated creature.
She went around "dream this and dream that"... but apparently she was trying to hit the target without being pushy.

So she was not sure it was a dream, she thought it was a dream and acted accordingly but it led her nowhere.
A direct question popped, when she felt Cat was very well disposed to conversation, helped her achieve her goal. So she knew.

A black florin. It was introduced in the first chapter of the story, when the former Balthasar talks to the King of Pirates, Gilbert Sullivan. That scene takes place after Kane's ship had sailed away so Kane does not know who sent him the florin. He assumes it comes from his father.
So now we know that a lot of people, including his father, want him dead and this must have something to do with the "diatribe" Callimaco was talking about.

So... a lot of people asked me if the black florin was like the black spot. Somehow... The black spot was invented by R.L. Stevenson for Treasure Island... it was a piece of paper that was blackened on one side and carried the sentence on the other side. It's a very clever narrative device and I needed something like that.

But it needed it to fit my time period and location...

Why a black florin? We know from chapter 2 that the currency used is the scudi and also some paper money had started circulating in Europe.

A florin is a very ancient coin and it could be white or black (moneta bianca and moneta nera). The first ones were made of silver, the second ones had copper and silver in it and had a lesser value.
That's why I picked it: a black florin is a useless coin and it's sent to show how useless the person who receives it is.. therefore the community wants to dispose of him. It's a death sentence.
Posted by dedasaur at 1:00 AM