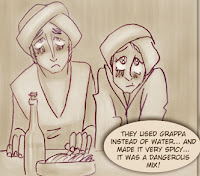 So the only curiosity we have this time around is about grappa and the truth about the soup is finally revealed: it was super alcoholic.

As usual I link to Wikipedia but PLEASE do not rely on it as your only source, research the things properly (in books would be better :D)

Grappa, can be easily googled, it's an Italian type of distilled beverage, we usually sip at the end of a meal, as a digestive or take in small shots.

Sometimes you can cook with it but the alcohol would evaporate in the process... unless you simmer.


Yes, do not go and read the silly and superficial and not so well researched answers you get from the internet... people type fast and don't think before hand, give immediate responses and opinion without stopping to think (switch the brain on, people!!! XDD).
The web makes us all passive aggressive nowadays and also creates new form of bullism... but they talk from theory and not from personal experience.

If you simmer, instead of bringing your soup/fondue to boiling, you don't get rid of all the alcohol.
So if people tells you: you got drunk on soup/fondue, are you an idiot?
They are being ignorant and/or never tried the real deal.

You can get drunk or super tipsy from something cooked the proper way. Fondue should never reach a boiling state, it should only simmer and depending on how much alcohol you put in there, if you have a heavy hand, you can get your guests drunk.

I got very tipsy on fondue once, it was cooked with grappa and white wine. Fact is the fondue was cooked properly, which means the cheese was melted and left simmering and alcohol stayed right where it was supposed to be. It was very very good and I love cheese so I kept on eating and eating.
I only felt just the bitter flavor, like an after taste but it did not bother me... the alcohol would kick in later, when I realized that I was already sitting on the floor. It was hilarious!

I wanted to bring in this experience because I always thought it to be funny to get drunk from food... and also people take in alcohol in different ways.

Apparently Callista gets tipsy and passes out.
Cat was probably afraid of not being able to keep a clear mind and went for fresh air.
Lio assaulted Foxy.
The doctor could not take the spiciness and stayed sober and he tried to prevent Cassandra from going back to the evil "Ourssss" monster state.
Josh can take his alcohol - maybe because he is a big guy- so he only felt happier than usual.
Foxy probably got tamer.
Castalia did not have any and she passed out overwhelmed by emotions (which is exactly what happened to Kane in chapter 8).
As for Kane... he got... sort of... "sweet".
Hahahahahah!


Okay, anyways, thank you for waiting so long. The answer to: what was in the mysterious soup? - is finally out: alcohol.
And that's what got everybody acting weird.
Posted by dedasaur at 2:07 AM