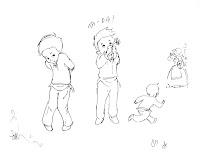 Our second entry for today comes from Isolde. (she's the author of the fan fiction about the shallalah remember? If you haven't read that comic go here, it's hilarious!)
And here's the character as her author describes him:
Everyone is standing around (talking/walking/etc.) in the marketplace when one of the gang feels a tug on their clothes. That person (who is the approached person? Imagine the possibilities *wiggle eyebrows*) looks down and sees a little boy who has yet to lose his baby fat smiling shyly upwards with his hands behind his back. He then suddenly brings out flowers and says "you're pretty, will you marry me?". Sadly, due to age differences (or gender similarities), he is rejected; but he's alright because he gets a promise/orange/something to placate him and he runs off to a woman who is shouting "JULIAN!!!"

I have no clue if that name is appropriate? There's nothing extraordinary about this boy other then he is extremely cute haha. Growing up to be a heartbreaker that one. :) Again, sorry my drawing is not particularly polished, I only know how to use a pen and scanner and somehow it always end up looking strange after being scanned.... He has jet black hair btw, though I forgot to colour it in :p
We might need to call him Giuliano as we approach another Sicilian island next. ^_-
Hurray for our second entry, I find him adorable already!
Posted by dedasaur at 1:33 AM

Email ThisBlogThis!Share to TwitterShare to FacebookShare to Pinterest
Labels: contest

So who could he be proposing to, I wonder? Perhaps when I write my fiction, one of my OC's would love to meet him...

Haha I just saw this. I would be honoured and so would he ;)
-Isolde