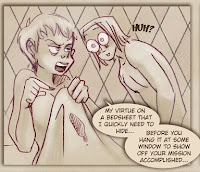 It was a barbaric tradition but it was in use, especially in small towns, like my own, almost up until the beginning of the 1900 (in fact the town I live in has also a famous play, in dialect, about this topic: the bridal bed sheet).

Traditionally the family would hang the bed sheet at the balcony, to show the whole world that the bride was pure and wedding was... consummated.

Clearly the concept of privacy was not in place yet. (no matter how much girls disliked the tradition, including Kes.)

There was a similar tradition for Jews as well but, thank God, did not include a balcony.

Rather the bride and groom had to spend seven days in the bridal chamber that the groom had prepared and only after seven days he would show the bed sheet to his friends.


Now we all know how girls lose their virtue, we don't have to go into that, we all know that anatomically girls are all different... some bleed a lot, some don't bleed at all, some bleed for days.
As to how much blood to find on the bed sheet, please consider that natural fibers were not bleached nor treated for colors and therefore the Schmerber level of the fabric is very different. Some are more permeable and a drop of anything would become a lake... and others were not.

Are these details relevant to the progression of the story? Not at all! XD

I'd just say let's not focus on useless details to the point of losing of sight the big picture, which is: the whole thing is a joke, yes, something to laugh about, but it is also a strong symbol that says how much more unconventional this union is becoming.

I think in the Italian version - I was soooo pooped when I wrote that part - it might have used proper language while in fact I was supposed to write "close" as well.
But a few pages went online wrong this week and I will have to spend the whole day tomorrow to fix the mistakes.

Unfortunately for me I am slowing down a lot. I need my time to draw and I don't have time to do that anymore. So, I am sorry, but from now on I will not be able to answer any question until the curiosity show up and I will refer you more and more to the FAQ page. 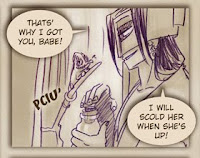 Do chameleon make any noise?

Not really... they make a nice humming sound, like a vibration, which is supposedly how they communicate with each other.
They hiss, like all good lizards should, and some of them whistle... which means when they are very upset, at the end of their hissing sound, they make this weird little noise that is called a whistle - although it doesn't really sound like a whistle to me.
To me it sounds like pciu' pciu' at least for the little fella I see in my Region.


So you know... Fickle, just like Castalia, hates being hungry and fsssssk and pciu' in protest.
Any other sound coming from a chameleon has to be monitored as they catch respiratory diseases very easily, if they are not treated the right way.

Lucky for us Fickle is a Sicilian chameleon, does not need the same amount of care an exotic one would. Unlucky for Fickle... we know what his duty on board is and, even though Kane likes him very much, the well being of the pet is directly in proportion with Kane's chance of survival.
Posted by dedasaur at 3:28 AM