The In and Out of storytelling.

When we think about a story we think that our plot will move our character forward and sometimes we get tricked into believing that, no matter what happens, the more things we add the better the story will get. 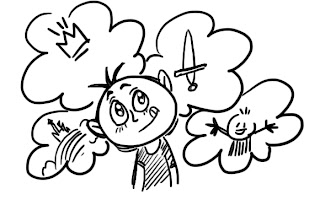 Truth be told, for storytelling, simple is best. Adding details must be done carefully. The details that don't help your story move forward will hold it back. If they don't support your character, they'll make him/her trip and fall.

That's why it is very important to remember that a story is all about: a dude with a dilemma and how he deals with it.

But is your dude going to have a dilemma if he is statically accepting what is around him? The dilemma should always arise because the dream and the conflict are clashing.

That's why our D+D+D formula needs an extra smaller D in it: D+d+D+D.
The smaller "d" is the dream and, if you think about it, it is not so small after all. You have to provide your characters with needs and want. Particularly one need and want that will be in contrast with what they have. That dream and want will be the fuel to the engine called: achieving a goal.


If we stop for a second to analyze the stuff dreams are made of we realize that there are basically two types of dreams and wants. I usually play a little game with my students and tell them: Disney movies use a smart move, they don't have enough time to show you the DREAM so their characters will sing it to you. Let's make a list of what disney characters say in songs.
1) Oh, I just can't wait to be king;
2) Just around the river bend;
3) I want adventures in the great wide somewhere, I want it more than I can tell;
4) If only they'd look closer, would they see a poor boy, no sire, they'd find out there's so much more to me;
5) A whole new world, a new fantastic point of view;
6) I can go the distance;
7) When will my reflection show who I am inside;
8) Out of the sea, wish I could be, part of that World;

Oh, I could go on for ever. I was trained in those standards, I know them by heart.


The first two look outside and the third one looks inside the character.

So when creating a type of dream for your character you need to figure out what kind of person he/she is: is he/she an IN kind of guy/gal or an OUT kind of guy/gal?

It is very important to establish this because it will help you establish the nature of the conflict as well.

In the next post we'll see the nature of the conflict and how it reacts to the dream.
Posted by dedasaur at 1:25 PM