Pea spent many hours getting ready for her date. She started the night before... curler her hair (has no irons so I think she is using ribbons) and pinches her cheeks for blush... now when it comes to gloss she either bought some or she borrowed from Kes.

I tend to propend for this second option as, I noticed, Kes is wearing some lipgloss too. I doubt they look anything like the petroleum jelly thing we use today. But why a natural look instead of a real makeup?  Well, a complete make up was frowned upon in the XVII century, the natural look was in and an artificial look with lipstick might lead people to think that the lady... might not be a lady after all. 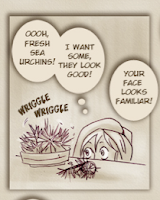 Sea urchins used to be easier to find when I was a kid (you had to be careful where you stepped when you went to the beach - and we are not talking sandy beach, we are talking those nice rocky places with lots of life and a reef where you either step down in the water or jump into it and it's already 6 meters deep).


Well, when I was a kid sea horses used to come very close to the shore too.

Lots of that beautiful stuff is dead now and I eating seafood has become kinda dangerous. But when I was a kid, my auntie would dive in the waters and get me sea urchins, cut them open and feed them to me with a spoon: and that was my afternoon snack.

A common way to eat Sea urchins in Italy, nowadays, would be to eat them with pasta... making a tomato sauce with it.

But the most traditional places would still give you break and lemon and ask you to eat them up raw, on bread.  That's what Kane and Castalia are doing.

If in season they'd be nice and full, but since we are approaching fall in the story, Kane and Castalia are probably enjoying the last ones and same goes for the mantis shrimp... reason why what Kane is offering truly is a feast of food that is hard to find.

These are mantis shrimps and this is what they look like after you cook them. Yes, Italians can turn anything into a past dish.

Now Tiella and Lacryma Christi (this one is a wine) are easy to google but Wikipedia has it wrong this time around and list the tiella in the rice dishes (but it's not paella, that one's Spanish). 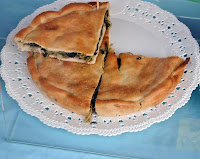 Tiella is actually a dip dish pizza made with either vegetables or seafood and it looks like this.

Is it good? You have no idea! LOL 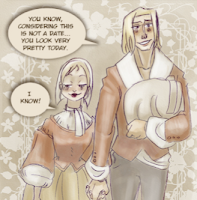 If at first Kes was yellow and Wes was purple... and this two colors met in ochre when they finally got together... now it's time to also move spiritually together to another level.

A lot of times you hear that red is the color of love and passion. Well in movies it's a color of power and it's merely an attention grabber... it is also quite cold as a color... but the addition of orange, that is used for spirituality, bring the concept of love back in the color.

Kes and Wes are undergoing a fundamental moment in their relationship. It's a rite of passage and transformation that's why they need a ritual color on them. 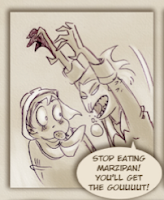 In case you were wondering why the marzipan eaten by Kes is shaped like a strawberry maybe it is time for you to meet la Frutta Martorana or Pasta Reale. Marzipan in the South of Italy is sculpted to look like little fruits or lambs (for easter) and they are quite cute to look at. Of course it is also good... in small quantity... because it's still almond paste, very very sweet.

Oooh, I could go on and on for ever on men and dogs in the XVII century!!! I took a course about it. It was amazing!

Now, when I decided to turn the doc into a dog person I knew, instantly that I was going to receive bad vibes from cat lovers. Nevertheless I decided to go with it (and let me tell you soon enough even Cat and Kane will tell a few things that will make animal lovers shiver)... because I don't believe in superficial depictions of character and I don't believe in absolutely positive characters. Everybody has good and bad sides to them.

Only stereotypical, flat characters present exclusively positive traits that makes them 100% likable.
A good character is not likable, though, a good character is loved no matter what because he is consistent and that should make it gratifying to read about him. Expecting for a character to be 100% always just, always right and not full of contradictions means... settling down for a lie. I won't lie to you: people are people.

Now... what's up with the doc and dogs? Well, he was born in the XVII century so, like all men, he likes dogs.
If you go through art history and check paintings throughout history you will notice how often the presence of a dog is shown particularly in family pictures.

A good man always had a good hunting dog. A good portrait of a good man/wife/family had to have a dog in it because a dog is a symbol of loyalty, fidelity, stability and familiar love.

What about cats? No, let's please forget about the odd association of cat with witches (witches loved roosters)... have you ever wondered why female genitalia is referred to with a synonym for the word cat?
Well, yes, for german languages there is simply the coincidence that the P word sounded very much with the original word for vagina: puss.

But not for English and also how did French switch from pucelle (girl) to chatte? At one point the word pussie was used to refer to a woman, in general. Girls were pussie (coming from pucelle definitely)... and it was very well established in the XVII century so much that it gave birth to a typical sentence: let's go get some pussie - and that wasn't nice! It meant free love... actually not so free, you had to pay for it! (do you see where this is going?)

Coincidentally a cat was also a prostitute's favorite pet or it was so represented in art, as a symbol of evil and a symbol of prostitution. Since the middle ages and for a very long time, I mean... look at Manet's Olympia (Manet inspired by Titian replaced the dog with a cat!)

So dog fidelity/cat infidelity lasted for about... mhhh... 6 centuries or so... can you really blame the doctor for being a man of his times? Can you blame him for wanting and ideal of fidelity in his life?
I think it's quite admirable that he wishes so hard for such a drastic change in life: being a woman's man. What he is saying to Kes, by stopping her catlike behavior is: you are not a prostitute, you don't have to bribe me or throw yourself at me. In short he is protecting his lady's dignity.

His reaction is no different from Kane's reaction to the "kiss for favors" accident in the treasure room. Only instead of slamming the fist to the floor, probably because he knows Kes is acting in earnest, he shivers and feed her. XD

Now what about Kane. Kane does not mind Castalia acting like a kitty... and his brother acting like a monkey... and his other brother keeping a cow... and... come on he is a man of acceptance, he likes to empower people and make them masters of their own destiny (plus he has a weird theory about humans, you'll see).

He doesn't mind cats, no, but he is not an animal lover (let's face it: fickle is there to taste his food). He must have seen plenty of cats too in his life, that's why he does not mind them, let's not forget he grew up in a brothel.
His brother though... surely never meant to use the phrase "skinny cat" in a nice way when referring to Castalia!