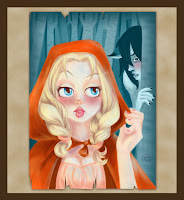 Hello there!
After the Musketeers it was time to draw Lio and Foxy as the Red Riding Hood gal and her wolfie.
At first I thought she should be the wolf... but that was to be expected so... I simply decided to stick to the simple storytelling confiding in the fact that the reader would see the twist: the twinkle in the eyes.
Traditionally on December 31st I draw something that accompanies me across midnight to the new year. So let's say this was done in two years and one decade (wow, 2011, entering the second decade already!) but it took 4 hours to complete.
The poor wolfie/doggie Foxy... is sooo doomed! I wonder if something already happened and the bad Red Hot Riding Hood is leaving him behind saying: thank you for the meal XDD
...or things have yet to happen and the shy little boy doesn't know what's coming his way!
Any way you want to see this: Happy New Year again.
Balthasar will have its first anniversay on January 18th.
I hope I have to time to plan something really cute for that day.
Posted by dedasaur at 11:53 PM