Wedding present and a contest?

I have to go to a wedding tomorrow and the bride and groom asked me for some drawings as a present.
They asked for robots at first but it was a total disaster XDD So they said: pirates!
Ohhh good!
I made these watercolor illustrations of Wilson Kane and Castalia and decided to mount them on a canvas. 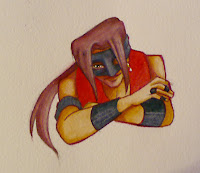 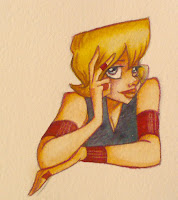 I wanted to find a frame with a passepartout but the store I went to was sold out.
So I started using gels, gesso, glue and gold dust to make something that would look good with their black furniture. I am still varnishing these - cuz she needs to be able to dust them - so the paper looks wobbly in these pictures but once the gel dries the matte will be all even and they should look nice and shiny too! The reflections you see is the gold dust.
I took these pictures in direct sunlight so they look weird, lol, but they do have a nice antique feel to them
--------
And now to the important matters!
I am 4 pages into the installment and now that I am done with this Art Attack thingy I can go on working.
I was pondering though... How well do you like contest with actual drawings as a prize?
I was planning to start a new game: try and guess what Wilson Kane looks like without his mask and was thinking of opening two different contests!
One where you draw the whole thing yourself and can be creative about it.
The other one for people who don't draw but want to play as well (where I would draw most of the face except the part hidden by the mask and you would have to try and draw THAT part only).
Of course the winner will be chosen with a poll!
I need an answer on this though because I would have to draw the partial Kane on purpose.
The winners of the contests could ask me any kind of drawing and I would ship it to them - the actual paper drawing (that is if you think that an actual drawing good enough to be a prize, otherwise you name it! XD It would be fun to organize this together and then let SmackJeeves know about it).
Posted by dedasaur at 3:22 PM