What? You are 13 days away from deadline and you go around taking week-ends off? Go back to work, now...
Yes yes, you are right... but museums were for free this weekend and I needed to look at beautiful things ^^"! Plus, here, I was rewarded as I found two our friends in the Palazzo Altemps' museum:
- One is Calliope... see?
She is the muse of poetry (how cute that her sister, Castalia, is to be a inspirational fountain for poets too) and she is wearing the cutest tunic with buttons on her sleeves. 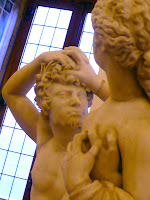 - The other one is Cat! I am not kidding, that's the face there! Hahahaha.
Okay let's face it, it was bound to happen... where does Cat's face come from? I confess it: it's a typical Bernini's face. (Actually if you were to go on the Bridge of the Angels, in front of Castel Sant'Angelo... there you'd find the whole crew!).
But this is an Ancient statue, right? What does it have to do with Bernini? Well... there was this guy called Winckelmann who really believed in perfection and beauty.
And sometimes perfection and beauty came from Greece but came in pieces.
Back in the days, people spent most of their time "fixing" the statues that were found broken and sticking pieces of other statues to the original ones... in order to have them look pretty.
Of course they thought they was doing them good.... and Winckelmann wasn't the first one to do like this kinds of things but he probably was the one who approved them the most - since statues needed to be perfect.
There you see... this group here had limbs and heads missing and actually the girl's head has been glued at the wrong angle - as she is supposed to look at the satyr straight into the eye while they fight... she is a nymph, by the way. Anyways according to the archaeologists this statue had been completed by Gian Lorenzo Bernini: heads, hands and some fingers. 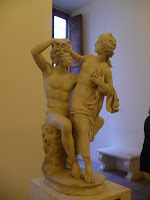 Oh yeah, I decided that since Winckelmann approves "fixing things" around... I could photoshop her head back at the right angle so that she can fight the satyr and all flirty with the guy just the way she should!
That's what you get when Ancient meets Bernini and Deda meets them both!
Aren't they cute?
I so want to put this in, at some point... who's the lucky girl... I wonder! ^__^
Posted by dedasaur at 9:02 PM